A month of hatred has landed on world Jewry: swastikas and graffiti throughout the United States, anti-Semitic slogans in every European city, desecrated graves in Eastern Europe, and the horrible attack on Argentina’s chief rabbi. These are only some of the cases reported in the media.

How is it possible that in 2019 anti-Semitism is erupting in every corner of the world? How are Jews still persecuted? How is it that the same hatred reigns in Argentinians, the French, Americans and Russians? How could it be that the brilliant Jewish mind, which had just flew a spaceship to the moon and picked up an Oscar, has not managed to defeat the thousands-of-years-old hatred towards us?

The problem with anti-Semitism lies in our lack of understanding its root cause. Since we never treat the root of it, it keeps coming back to haunt us wherever we go.
Kabbalists, on the other hand, have always pointed to the root of anti-Semitism as well as the solution for it. For them, the resurgence of anti-Semitism in our time is neither surprising nor is it a passing fad.

The anti-Semitic hostility towards the Jews is an expression of an inexplicable feeling, an inherent demand that lies in humanity. This is why Jews are typically blamed for all the evils in the world. While very few anti-Semites can articulate their claim, a deep-seated demand towards the Jews is subconsciously brewing in every person in the world.

We Jews are deluding ourselves. We believe the hatred stems from envy: Jews are smart, successful and innovative, they control the media, banks and commerce. But these are no more than superficial justifications that both we and our haters use in order to rationalize the hatred.

This is precisely what the greatest Kabbalist of the previous century, Yehuda Ashlag, wrote about: “Israel is hated by all nations, whether it is due to religion, race, capitalism, communism, cosmopolitanism, and so forth. This is because hatred precedes all other reasons, and yet each one resolves his hatred according to his own psychology.”

Kabbalists describe anti-Semitism as a law of nature. It stems from the inherent connection between Israel and the nations of the world. The role of the Jewish people is to pave the way for unity above all differences between human beings. Human unity is the only solution to all the evils in the world, and nature directs the whole of humanity towards unity.

Hence the forecast: anti-Semitism will continue and intensify until we internalize and fulfill our function in the world – to serve as an example of unity for the rest of humanity. This is how we will become “a light unto the nations,” since “the Israeli nation had been constructed as a kind of gateway through which the sparks of purification will flow onto all of mankind throughout the world, until they can perceive the pleasantness and serenity that exist in the kernel of love of others.” (Kabbalist Yehuda Ashlag, “The Arvut“). 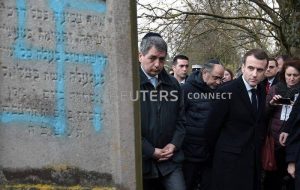 Fall Into Reason And Rise Into Faith