-How do we accept evil?
-There is no evil. Evil shows a person that he hasn’t yet attained perfection in goodness. Unrevealed good is felt as evil. And it is felt clearly, vividly, so man will pay attention to where else he can additionally correct this quality and turn it to good.

“Torah and work” means one studies Torah so Torah will bring him the Light of Torah, so he could shift his attention from reception to bestowal, which will allow him to connect to the Creator, which is called studying “Li Shma.”
(Rabash, “Torah and Work by the Path of the Creator”)

It is essential for everyone to study Kabbalah. Even if one learns the entire Torah and becomes the most righteous of his generation, if he hasn’t learned Kabbalah, he must return to this world to learn the secrets of Kabbalah. (Baal HaSulam, foreword to the book, The Sage’s Mouth)

Initially the system is set in the initial and final states. Only the character of motion is up to us: by accelerating the path, we evade the blows with our efforts, the path of good development.
By slowing down the path, we elicit negative influences upon us ….
—the path becomes a path of suffering.

The topic of “love and hate,” the need to balance these two qualities of our nature, passed through the whole convention like a red thread.
#spirituality #love #hate

The international Kabbalah congress in Israel just finished—it was attended by over 5,000 students from different countries, from distant corners of the world.
#kabbalah #convention #TelAviv 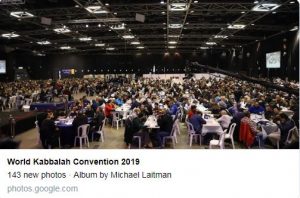 Kabbalah demands sagely investigators of hearts that devote 20 to 30 years to it, and who are only then able to testify to it. (Baal HaSulam. Kabbalah and Philosophy)
The Torah is attained only in a group. (Bavli, Brachot 63,2)
The ten sits and works in the Torah—the Schechinah among them. (Avot 3,6)