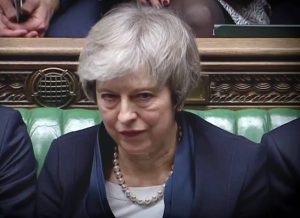 “This is the most significant vote that any of us will be part of in our political careers,” pleads UK Prime Minister Theresa May to the House of Commons just moments before her Brexit deal was turned down in what was the largest government defeat in the UK since 1924.

But as her defeat was historically certain, so is the future of Great Britain uncertain. The prospect of exiting the EU without any deal whatsoever could have very negative consequences, and a deal that is agreeable by all parties is still hard to conceive.

Looking beyond the Brexit due date of March 29, however, one thing is very certain: The fate of the UK, is tied to the European Titanic, which slowly but surely, is going to sink. It could take a decade or more, but ultimately, the EU will not stay afloat.

The crumbling EU is yet another instance of what is happening in the world at large. We’re in a time when human connections are breaking to pieces on all levels, whether it is between parents and children, brothers and sisters, marriages, communities and entire societies — all are gradually disintegrating.

We are witnessing a new era in the evolution of human society. For hundreds of years, we were being pushed by our egos to form greater and more beneficial connections, a development which has given us science, culture, education and so forth. The human ego was climbing upwards towards its peak.

However, along with the turn of the century, a new phase is taking shape. The human ego begins to develop in the opposite direction, increasingly making us feel that it is more convenient and beneficial to break away from each other. The creation of the EU and its gradual disintegration reflect exactly this process.

Forming the EU was an idea that made a lot of sense; however, the correct preparation and foundation for it were lacking. The time was right, but the method to do it wasn’t there. Herein lies the failure that led to where we are today.

In order to create sustainable societies in our time, political institutions and economic systems are not enough. The evolution of the human ego requires that we form a whole new level of connection between people. We have to discover the underlying network that is embedded in nature and binds us together.

According to the wisdom of Kabbalah, this is where the role of the Jewish people becomes crucial, since the Jewish people was founded on discovering this network of human connection, and to this day they carry the method and are able to access it and share with the rest of the world

Without fostering a new level of connection between people, the collapse of the EU is bound to happen. We can expect to see greater and greater division among European countries, to the point of violence between citizens, as well as hostility between nations. In fact, the vote for Brexit itself was a clear indication of the UK’s social divide, with less than 2% of voters who tipped the scale.

Our time demands that we become conscious of how nature guides us towards greater connection. The smartest thing for leaders to do would be to stop everything they’re doing right now and use the means at their disposal to initiate a massive educational campaign.

Instead of the futile attempts to make decisions based on a shattered state of society, we have to focus on forging a new level of connection between people that will lead to better decisions. The EU married together 500 million people politically and economically, but this marriage will end painfully unless it is matched with a deeper human connection.
[239805]

Davos 2019: Six Questions about Our Future That We Shouldn’t Expect the Forum to Answer
Podcast Powered by podPress (v8.8)