Since the adoption of European Convention on Human Rights, it became clear that the migration issue is a religious, economic, and political issue. Europe has become wiser and today wants to withdraw from the global migration pact. Egoism explains to us that it won’t let us live together!

Instead of solving society’s and the world’s problems, we multiply them, since we don’t see the source.
Yet, it’s programmed in the development of our egoism—to force us to correct it, not its outcomes, which we are constantly engaged in.
Naturally, we can’t rid of them fast enough.

Turning global, the world turns to Jews with a claim—the Jews must assume their role in the development of the world that needs to know how to unite. This method is in the Jews’ hands and only in Kabbalah.
If it’s not learned, the world will face global wars and Jews will be exterminated!

Henry Ford: International Jewry is the main problem of the world.
Jews kept to themselves thanks to the fact that they obeyed the laws of nature, and violation of such led to disintegration of many nations.
This people is a symbol of ancient wisdom, the source of our spiritual wealth.
#jewish #jews

The growth rate of egoism and, accordingly, the emergence of problems is increasing. There’s no solution but to recognize that we must turn to the root of the problems —the egoism growing in man and in society. And we can work with it only by using the method proposed by Kabbalah.

We must realize that Kabbalah doesn’t expect us to know things or even understand the Creator, but to spread the goal of creation and its program—among the Jews, then among the nations of the world and do this not to reduce suffering in the world, but to fulfill the Creator’s desire

In the formation of my soul I must imagine that I am alone in the world and all I see is a reflection of my consciousness. Including my ten. I am surrounded by my qualities. When I reform them into bestowal and love, the whole world will become only a ten, Malchut of Infinity, HaVaYaH.

In our aspirations for the Creator we must always imagine the system HaVaYaH, nothing more. After all, only 4 stages of direct light emanate from the Creator—to the Malchut of Infinity, followed by TZA (Tzimtzum Aleph – the first restriction) of Malchut, and all other actions emanate from this Malchut, the creatures.

To love is to know how to provide another with what he is lacking, while he can fill my lack. This is an integral mechanism of all mankind.

Europeans are developing a critical attitude toward Israel as a state of the white power over religious and ethnic minorities, with the use of force to resolve a conflict. The media forms a negative attitude towards Jews, and the population shifts the acts of Israel to local Jews.

What’s left for the EU to do is to start common Brexit of the entire EU. Or, they will soon face war and discord. There’s another solution: to educate Europeans in the spirit of mutual tolerance and communication. But the EU government is incapable of making such a decision due to its narrow egoism.

December 15-16, 2018 we held the second International Virtual Kabbalah Conference.
Over 3,500 students at 180 Kabbalah study centers and thousands of men and women who connected individually, gathered around the world to unlock the power of unity at a new level. 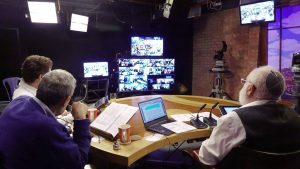 “Israel became the guarantor of the correction of the whole world by the power of the Torah. Everything depends on the people of Israel: when they correct themselves, all creatures follow them.” (Book Sefat Emet (Language of Truth), Shemot, Yithro)

“In this generation nations desire #Israel’s destruction. As per Talmud “All sufferings come into the world only for Israel” & Tikkunei HaZohar. ” After all, their actions cause poverty, humiliation, murder, and robbery all over the world.”
(Baal HaSulam, Preface to the Book of Zohar)
From Twitter, 12/19/18

“Why The European Union Needs A Good Marriage Counselor” (Medium)