“Why The European Union Needs A Good Marriage Counselor” (Medium) 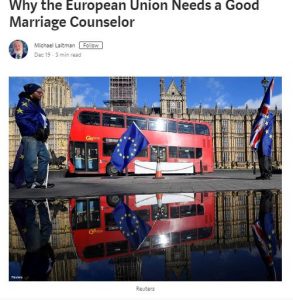 The wedding took place on May 9, 1950. French Foreign Minister Robert Schumann initiated a program for France and Germany to collaborate in the production of coal and steel, which were important resources for conducting war. Belgium, Italy, Luxembourg and the Netherlands joined the “marriage contract,” and 6 years later the same countries signed the Rome Treaty, creating what we now know as “the European Union.”

On the face of it, the connection was strengthened with the declaration of a common currency and the establishment of the Eurozone in early 1999. And so, countries who had massacred each other in two world wars were now good friends.

The honeymoon was perfect. Countries with developing economies oriented towards growth, who were not very wealthy and established, enjoyed the confidence of the EU’s strong economies that agreed to lend them money at low interest rates. But when Greece began to stumble, the fear of a domino effect put the strong countries on high alert.

Wealthy Germany, who could have collapsed immediately, provided a cash flow along with the European Central Bank and the International Monetary Fund, and thus the European Union rescued Greece and the entire Eurozone from a terrible crisis. Second in line for rescue was Portugal, followed by Spain, Italy and Ireland — countries that were given the acronym “PIIGS.”

Thus, the first few years of the successful marriage were over. Each country began to be more concerned about its own interests, its own plans, its own calculation of whether being part of the EU family is profitable or not. In many ways, what used to be an asset, was now becoming a dangerous burden.

These days, the loudest alarm bell echoes in Britain. The United Kingdom’s departure from the EU began on March 2017. And today, right before pulling away, EU leaders are toughening their positions and planning to charge astronomical figures from Britain. Their animosity to anyone who reveals their loss is growing. The Brexit affair, however, reveals a more important truth: the EU is currently divided, broken and will not hold for long.

Today’s EU needs a good marriage counselor. Someone who will explain to the European leaders and their citizens that connection between economies starts from connection between people. When two people get married only due to economic convenience, it is a matter of time until they realize their marriage is bound to fail. The same holds true for Europe and this is what Europeans must recognize today.

The first step is to prevent the family members from finding themselves in a bad divorce process that takes a big financial and emotional toll on everyone, and may even lead to violence. Instead, Europeans should be reminded of the nature of the human ego that resides in them, as it does in every human being. Whether it’s at the individual level or the national level, when the human ego erupts between people it engenders division, hostility and hatred. And when that happens, no agreement will hold water.

The concept of the European Union was a good idea in theory, but in order to make it work in practice, it is mandatory to understand how the laws of nature operate on the human level.

As the wisdom of Kabbalah explains, the growth of the human ego is expected when people try to connect and form some bonds between them. It is a natural process that is happening in order for human beings to elevate their level of connection.

The EU should set up an emergency council to educate all citizens, and devise a continent-wide plan for forming balanced, considerate and positive human relations among all people, just like in a giant family with 500 million citizens. This will necessitate the active and continuous participation of every European and the involvement of political venues, media channels, universities, and workplaces.

If the Europeans learn to how to strengthen their connection above the growing ego, without erasing the uniqueness of each nation, they will be able to save their failing marriage.
[238729]