Newsmax: “To Thoughtfully Govern Leaders Must Rediscover the Family”

My article in Newsmax: “To Thoughtfully Govern Leaders Must Rediscover the Family” 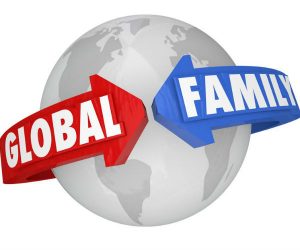 One hundred years later, bells rang at the foot of the Arc de Triomphe in Paris as leaders of some 70 countries marched shoulder to shoulder on the plaza, marking the 100th anniversary of the armistice that brought the war to an end.

Leaders such as Emmanuel Macron, Vladimir Putin, Angela Merkel, Donald Trump, and Benjamin Netanyahu walked on the battleground where fierce battles took place, millions of soldiers were killed, and much blood was spilled as a result of the cruel war between nations.

But does this impressive demonstration indicate that we are at last close to true peace?

Are we on the verge of extending an umbrella of peace and unity that will cover all the European nations?

As long as economic inequality continues to escalate in most countries and waves of immigrants continue to shake the demographic-cultural fabric of Europe, true unity is not in sight. These crises are the result of an ultra-liberal ideology that has gained strength and spread throughout the continent.

Every day, these two crises deepen the social and political polarization.

The rich become richer, the poor become poorer, and immigrants bring with them religion and customs that incite the local Europeans. As a result, the extreme right is strengthening throughout Europe, and as long as the public within European countries is divided, unity across Europe should not be expected.

Such a spectacular ceremony only widens the gap between the idyllic façade put forward by the leadership and the daily reality in Europe. European leaders are making an attempt that doesn’t account for the selfish, alienating nature of the human ego; the attempt to welcome everyone into their borders and create a common market where everyone wins requires a solid educational foundation to form genuine integration between people.

The way European leaders think and make decisions might also have to do with an interesting fact that is common to many of them — they don’t have biological children. Take a look at the following list:

People who dan’t have children see the world differently than those who do. They have a different outlook on life, they analyze the past, present, and future differently. In contrast, any person who has children lives with a certain sense of responsibility for his or her family, which accompanies and influences their decision-making processes.

Some commentators have already made a link between European leaders’ lack of thought about the future and the fact that they are childless. However, it doesn’t end with thinking about the future. More than a social status, being a parent is a natural status.

A childless leader lacks instincts that he or she cannot acquire in any other way. They could be highly intellectual, incredibly skilled and gifted in many different ways, and yet, they lack a natural drive that exists in any average parent—to care for and protect their children. And their decisions will be affected by that lack.

But perhaps even more interesting is: what does the public think about this phenomenon?

The answer is that they mostly don’t.

The general public is not interested and many are not even aware of this particular aspect of their leaders’ personal lives. Ask yourselves: were you fully aware of all the childless leaders in the above list?

That being said, there’s no point in condemning anyone. Neither the childless leaders nor their indifferent citizens. We’re all in the same boat of human development, and human society is going through a unique phase, where the human ego is reaching its peak.

This explains why the individual has become more important than ever. The importance of the family unit has declined, and thus, today even a childless leader can be a mother and father to millions of people.

But human evolution doesn’t end there.

The human ego will continue to grow and drive us apart until it leads us to realize that we have to rise above it, and cultivate a higher level of human connection. Then, we will see the importance of rebuilding our connections on all levels — from the family unit, through the community, to the rest of society.

The aspiration for a common future that liberal European leaders envision can become realistic when humans cultivate a deeper sense of connection. As long as the ego drives the moves on the ground, the attempts of European leaders will do more harm than good.

Only when leaders make education towards unity their highest priority and aim to bring citizens together above all differences, the common sense of human connection will guide Europe towards a better future.
[236723]