The South American immigrant convoy has reached Mexico and is debating whether to stay there or keep moving towards the U.S. border. President Trump, on the other hand, had already deployed 5,200 soldiers to the Mexican border to stop the “invasion.”

If you had to make the decisions about immigration, how would you deal with it?

Undoubtedly, much of the uniqueness of the United States comes from being established as a nation of immigrants, by pioneers who came from Europe and built the world superpower.” However, this is nostalgia. The world has changed and today’s immigrants come with different reasons and motivations.

It’s interesting to consider what would happen if the United States would initiate an open border policy welcoming everyone in. What would happen the next day? How would Americans deal with millions of people coming into their country?

My heart goes out to immigrants who flee their country because they are truly being persecuted or denied of basic human rights. Yet every country has its laws and they should be respected. If there are American families or individuals whose heart is aching for the immigrants, why not give them legal aid to help them welcome an immigrant or even a family of immigrants into their homes? This is what I would recommend President Trump do in the short term.

In the long run, however, I recommend a thorough integration program as part of the U.S. immigration policy. Such a program would be a precondition for immigration, and would train every immigrant to learn the language, to familiarize him/herself with the local culture, study the laws, the social norms and so forth. Before they begin with the program, immigrants would have to demonstrate a genuine desire to be absorbed into the society and contribute to it. 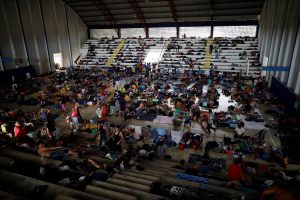 Everybody Has A Chance

See Your Soul Through The Friends
Podcast Powered by podPress (v8.8)