New Theories of the Financial Crisis

This was sent by my student R. Tzarev:
The financial crisis in the United States is conducted forcefully and is controlled. Russia, Iran, China and the Emirates possess the world’s largest gold and foreign currency reserves. Russia, Iran, Venezuela, China, India and Brazil have begun creating their own alternative global economic system. Together they are beginning to pressure Europe, which is dependent on energy resources, causing it to break away from the US. By now Germany, Italy and France are lobbying for Russia’s interests, speaking out against the US. The European countries, Russia, Iran, Venezuela and Kuwait are using the Euro instead of the dollar in their business dealings related to energy products. This rejection of the dollar in the energy dealings will bring about a catastrophic drop of the entire US economy. The US must not allow this to happen. America must not allow itself to be bullied or bankrupted. There’s your reason for the “crisis.”

This was sent by my student O. Yahalom:

In our world there is a system of interaction of two opposite forces – positive and negative, altruistic and egoistic. Otherwise there would never be any growth, change or exchange. Of course, in our world the altruistic force is also egoistic – giving for the sake of greater profit. The dynamics of the current events can be explained by the interaction of these two forces in the world.

The entire global economy is structured in such a way that a person does not hope to receive from a specific source, but from the system as a whole. This leads to the formation of long chains of exchange: one person exchanges with another, the other with someone else, and if the end of the chain gets lost somewhere, man’s animate egoism can no longer motivate him to work, because he no longer sees when he will receive the reward and from whom. The only thing left is a vague “altruistic” intention to receive something from someone. But it gets weaker, because egoism constantly grows – and that’s how an economic crisis starts.

An economic crisis cannot happen within the boundaries of a city, state or other kind of region, because even if the end of the chain is not seen physically, a person still feels that it’s there. However, economic crises take place regularly in the context of a country, yet none of the economists know exactly what causes them. The fact is that they are caused by the undulating changes of balance between egoism and altruism in large groups of people. When egoism recedes – business flourishes. But when egoism continues to grow, altruism grows weaker, and egoism suddenly takes over the people’s consciousness, telling them that they shouldn’t trust the system, but instead receive more and “to the point” – the more the better, and all for themselves!

The first true crisis of altruism on the level of a country happened in the US, in 1929. Back then the American economy came out of the crisis because Roosevelt pumped all the foremost leaders of production and economy with optimism.

The first true crisis on the global level happened in September 2008. The true causes of the crisis lie on the spiritual level, on the level of the opposition between egoism and altruism in every single person and in humanity as a whole. Accordingly, the solution, the way out of the economic crisis can only be found on the spiritual level – humanity’s work towards evoking the Light that corrects egoism.

The Baal Shem Tov (a great Kabbalist who lived in the Russian empire at the end of the 18th century, founder of the Hassidut movement): “If only the Russian Tzar knew how beneficial the study of the Torah is for his country, he would set a guard with a sword beside every Jew, who would stand over him and keep repeating: “Study the Torah! Study the Torah!”

The countries that will lose most from this crisis will be those with energy resources. All of the earth’s resources, no matter where they are, belong to all humankind (see Baal HaSulam’s newspaper, “HaUma (The Nation)” and the article “The Last Generation”). That’s because the Upper Force sees us – humanity – as one single body, the creation. And to the extent that every country (every organ of this body) acts against this unified altruistic organism (reveals that it is ill), to that extent it will eventually be punished (be influenced by negative, correcting feedback, which brings the system to harmony, to recovery) or rewarded (be successful in this world and reveal the governing force).

World On the Edge

The last issue of “The Economist” features the headline: “World on the Edge”: 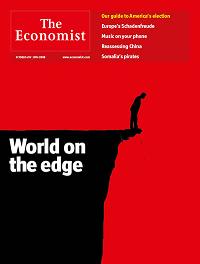 The purpose of our world is “To bring the creature to equivalence with the Creator,” and it is attained by observing the rule – “Love thy neighbor as thyself.” Nature (or the Creator – whatever you prefer) will force us to do this one way or another.

People who do not know about this see the world’s present condition as catastrophic. However, it’s in our power to quickly change the direction of the process. For more on this, see Part 2 of the book From Chaos to Harmony.