The Beginning of Enlightenment

News Report (from Press Room and SvobodaNews):Henry Paulson said during a press conference: “It is critical for governments to continue to take individual and collective actions to provide much-needed liquidity, strengthen financial institutions, enhance market stability, and develop a comprehensive regulatory response …

We must continue to closely coordinate our actions and work within a common framework so that the action of one country does not come at the expense of others or the stability of the system as a whole. In addition, in consultation with Brazil, the G-20 President, I am calling for a special meeting of the G-20 to discuss how we might coordinate to lessen the effects of global market turmoil and the economic slowdown on all of our countries …

We see evidence every day that world economies and financial markets are more connected and interdependent than at any time in history … This really is a global market and a global economy. Economic growth and strength of one country makes everyone else stronger, while weakness of one country makes all of us weaker. This is why we need to work together. This press conference is very important.”

My Comment: I was glad to read this news report, and I am happy that people are quickly recognizing the need for unity and mutual efforts. However, the proposed solutions are still out-dated, like trying to inject a prosthetic limb.

We need to treat the human society as an independent, live organism that lives by its own laws, rather than the laws we invent. It lives by the law of “Love thy neighbor as thyself.”

We are once again entering the “biblical” times and their demands of man. We have come full circle. For now it is still ridiculous even to speak about observing this law. But nevertheless, even our thoughts about it will already start changing the condition of the world.

Where Is America Headed?

A question I received: I saw an interesting headline in “The Marker”: “America is turning into something it spent many years fighting – a socialist nation.”

We see that our nature is pushing us to care for one another. America, which does not want its entire economy to collapse, understands that everyone is interconnected, and now it’s also beginning to understand the consequences of capitalism. Is this nature’s way of directing us toward the correct form of coexistence?

My Answer: Absolutely! I am happy that so many news articles on this have been appearing in the press lately. They already show an understanding of the cause of the crisis – man’s incorrect behavior in society. Moreover, some articles even indicate that nature itself is pushing us to correct our social relations.

The first issue of the Kabbalah Today publication in Finnish was published today: 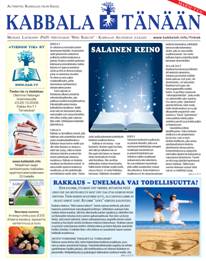 If you know how difficult it is to charm the “hot” Finnish youth, then you’ll appreciate the efforts made by our Finnish friends!

Who Will Be Most Affected by the Economic Crisis?

Questions I received on the economic crisis:

Question: Many of your students live in Russia. What do you think of how the economic crisis is progressing there?

My Answer: Russia will experience the economic crisis harder than Europe, America, or China. Russia will also experience its own crisis of self-love, ambition, separatism, and power. It will recognize that it is a part of the rest of the world, and that it needs to stop being hostile and aggressive. It will realize that it can’t survive any other way. Blaming America for the economic crisis will not solve the problem.

However, Russia can truly have its own “special path” if the people of Russia, with their inherent sensitivity and willingness to sacrifice material things for the sake of spirituality, will recognize the cause of suffering and the opportunity to rise above it. Then the Russian nation will really become special in the world.

By demonstrating to the entire world new social relations – the future of the world, not by order from “above” (from the authorities) but truly by order from above (from the Creator or Nature), by observing the law of love and bestowal, Russia will quickly become the leader in every regard. The choice is in its hands.

Question: Who will suffer most from the economic crisis?

My Answer: America will suffer least – not in terms of numbers, but percentage wise. Then Europe, and finally – Russia and China will suffer the most. There aren’t many consumers of Chinese products and Russian oil and gas.

Question: What will happen if Russia will close itself off from the rest of the world? After all, it has everything in order to be self-sufficient.

My Answer: The fact is that the current crisis is global, and no one can hide from it because everyone is fully integrated in the international economics. This is why political decisions cannot go against the economic decisions, and since there is only one economy, this also forces politics to become one! This has never happened before in the world. There were crises of a purely economic nature, or purely political, or social crises, but the present crisis is universal! This means that no one can separate from the rest of the world.

Question: Does the economic crisis affect only the finances in a direct manner?

My Answer: No, it also affects politics directly. I think that America is leaving the position of a “police officer” in the world. Now everyone will have to engage in this: Iran and Pakistan will advance toward the Caspian Sea, while China – toward Siberia. Islam will simply fill Russia – which is weakly Christian and halfway Islamic. To counterbalance this, Fascism may arise on the wave of patriotism.

Question: What is your organization doing during the period of economic crisis?

My Answer: We want to send our message out to the world – the method of correcting the economic crisis. We must therefore unite with the suffering of the world and share it. Only then will we will be able to correctly speak to the world and it will hear us.

What does it mean to suffer the suffering of others? Even though you personally don’t experience it, you are united with others, fully sharing their misfortune and helping them. This must happen according to the rule, “He who empathizes with the suffering of the masses merits mercy with them.”