“How Is War Today Different To War In The Past?” (Quora)

Michael Laitman, On Quora: “How is war today different to war in the past?“

In today’s war, we have the means to rise above the war and the conflict, and connect two opposing sides in a way where they complement each other.

In the current war, like in the previous world war, the world rose against the desire of one power to control others by force.

In addition to war manifesting in the physical world, it also plays out psychologically, in our thoughts and desires, at the very point where we agree on being in control. That is, we have self-determining matter, egoism, at the center of our being, built on receiving pleasure for itself alone. It is opposite to the altruistic force of nature, which is built on the bestowal of pleasure, and which precedes the egoistic matter.

Since the egoistic force is lower in status—a receiver—to the altruistic force—a giver—it comes to disagree with its status as a receiver, and instead chooses to acquire the giver’s status, equal in form with the altruistic force that created it. Accordingly, we see how today’s world holds a general mutual consensus against the desire of one power to control over another by force.

I very much hope that both sides will better understand the increasingly interconnected and interdependent ties we have today, how there are forces in nature that advance us to more unified states, and that they are ultimately awakening the wars we experience. Moreover, these forces also give us the opportunity to rise above the current wars we face, and unite.

I also hope that this understanding will lead us to a state where the conflicting sides will discover—which they indeed need to discover—the way by which they can both be satisfied, and moreover, that they will receive twofold what they would receive from one side defeating the other—”twofold” because they would draw the positive forces dwelling in nature into the connection that they establish.

War today is thus different to war in the past in that, today we have the means to rise above war and conflict, and connect two opposing sides in mutual complementarity.

I thus wish for all sides in conflict today to seek and discover unity above division, and by doing so, mutually enjoy a whole new level of peace, harmony and prosperity. 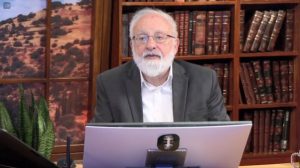 How To Neutralize The Evil Eye?
Podcast Powered by podPress (v8.8)