Assembling A System Of Separate Desires

Question: Why is it so difficult in our world to kindle a desire in people to attain and discover the upper light, the Creator?

Answer: A system exists in which an immense number of desires are concentrated. In the initial state, all of its parts were connected and the system was in an absolutely balanced state of eternity and wholeness.

After that, a breakage occurred, meaning that the connection between the parts in the system disappeared. Those broken parts that do not make it possible for the system to connect are called, “egoism.” 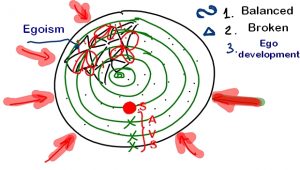 Why is this good? It is because the creature became distant from the Creator and therefore independence appeared in it. A system that was completely similar to the Creator became contrary to Him.

After the breakage, the system continued its egoistic development to our world. We have reached a situation in which the egoistic forces have become in complete control over the entire system. But the Ohr Makif (Surrounding Light), the Creator, still continues to operate on it.

He is beginning to shape the system, taking out and isolating the outermost circle first, then the next circle and so on, from a small egoism to a bigger and bigger egoism to the biggest egoism.

Under the influence of the light, the system first began to recover on the still, vegetative, and animate levels of nature. But when it reached the human level, a problem appeared since here a conscious understanding was required, which is where we are found, and it is up to us to assemble and manage it ourselves. In this way our mission is concluded.

Starting with our time, the system has stopped developing; it completed its development in the previous form on the still, vegetative, and animate levels, and we have reached the human level. A conscious attitude, an understanding of what we are doing is required here. So, we are living in a time which is not simple.

We must restore and reconstruct among us all of the various parts, gather and assemble the entire system into a single whole.

To do this, we must unite and participate in its assembly. How can we do this? Humanity is constantly trying to assemble itself because nature and society are pushing it toward this, but nothing has been successful. This is because to do that, we must arouse the higher power so that it will influence us.

The wisdom of Kabbalah has been given to us for that purpose. It explains how to attract the same force that will shape us. We just need to ask correctly. Before we ask, we must formulate the question, the need. It is precisely for this purpose that we are studying. Where are we, what must we ask, how do we ask? Which is to say, how do we develop a desire that is ready to correct. The entire wisdom of Kabbalah is preparing us just for this.
[246992]
From KabTV’s “Fundamentals of Kabbalah” 2/10/19

The Correct Algorithm Of Behavior

You Must Not Seek Fame For Doing Good Deeds
Podcast Powered by podPress (v8.8)