My new article on BIZCATALYST “Making Sense of the Global Anarchy” 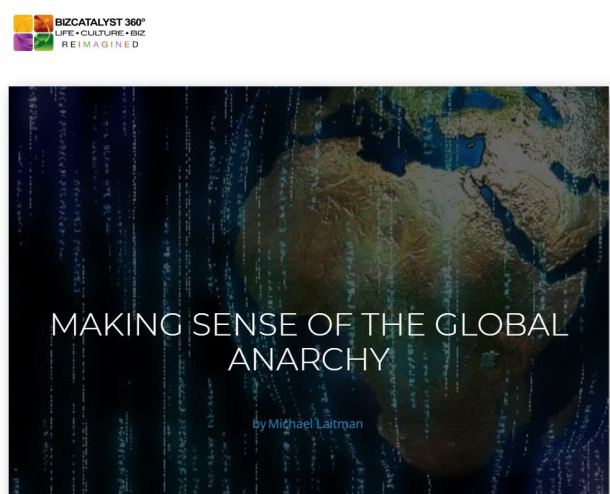 When you look at the world these days, all you see is anarchy. America is embroiled in an election campaign that’s so thick with hatred that one can only hope it will not end in a civil war. The EU has just signed a gigantic post-COVID recovery package, but the squabbling leading to the agreement exposed the aversion the member nations in the bloc feel for one another. Besides, we’re nowhere near a post-COVID reality, the package relies on an economic recovery that will not happen, and taxes on revenues that will not come, making the implementation of the package more than unlikely.

Meanwhile, the Middle East has never been a role model of stability, but today even more so—there’s not a single country in this war-stricken region that’s not disintegrating from within or whose economy is shattered and the citizens go hungry or both. Add to it the nearly signed China and Iran trade and military partnership, the tension between the U.S. and North Korea over the latter’s nuclear program, the deteriorating relationship between Moscow and Washington, and you end up finding Kremlin Spokesman Dmitry Peskov’s succinct statement very fitting: “The situation is very bad.”

In fact, the situation is so bad that when COVID-19 first erupted, it imposed a global paralysis that stalled the deterioration of the world toward a world war. But recently, the global outbursts of anarchy are proving that hatred spreads faster than even the coronavirus.

I am not pessimistic. When you look at the current chaos from the point of view of the end of the process, where all become one, it is clear that the only reason for the growing anarchy is to impel us to choose unity over dissension and antagonism. Moreover, because at the moment we are clearly choosing to fight one another for having different views than ours, anarchy is the only way to convince us that hatred doesn’t pay. As long as we are not convinced, anarchy will have to keep growing and inflict more torments on humanity. When chaos takes over and we have nothing to eat and no one to trust, we will be convinced to change course. But wouldn’t it be wiser to choose unity before all this happens?

When unity finally prevails, it will not include agreement among everyone. People were born different and will remain different for a good reason. Their differing views are expressions of the differences between them, which must remain. The problem is not that we are different; it is that we hate other people for not thinking like us, looking like us, speaking like us, and behaving like us, namely for not being us. The problem is our sense of entitlement and the conviction that only I am right, and everybody else is wrong. But if I hate people for thinking differently, even if they’re wrong, can it be that I am right? Can one nurture hatred and yet be right?

Contrary to our self-centered perspective, the world is one inclusive whole. Its elements complement one another so completely that no part can exist without its opposite. We can achieve unity only when we keep those opposites in balanced equilibrium. Night and day, summer and winter, birth and death, all those opposites don’t create anarchy. On the contrary, they create order, maintain balance, and sustain life!

In order to tap into that perspective, we must aim for the final outcome—the unity of all of humanity. When you place the unity of humanity at the end of the process and examine past and current events with union in mind, you realize that human development is moving inexorably in that direction. It is not a bad outcome. It is not a future of shortage or stress. It is a future of calm, prosperity, and mutual care for everyone. But because our egos resist caring for others, it depicts that future as grim and forbidding.

But calm and prosperity cannot be grim or forbidding. We can choose to approach our promising future quickly and pleasantly, working hand in hand on creating a thriving, diverse society whose members care for one another, or we can spurn the inevitable, insist on separation and hatred, and wait for reality to drag us to happiness against our will.