Three of the 15 Israelis aboard the quarantined Diamond Princess cruise liner have been diagnosed with the coronavirus and hospitalized in Japan, while extensive efforts are underway to evacuate the others home to Israel.

The help they demanded from Israel during their crisis and predicament raises the questions about the kind of support that the state of Israel should provide its citizens when they encounter certain extreme problems abroad.

While it is usual for the state to be concerned about its citizens’ welfare abroad, hard experience demonstrates that intervention procedures could be arranged in a much more beneficial way, both for citizens and for the country in general.

I completely support the state’s responsibility toward Israel’s citizens, provided it has the necessary infrastructure of mutual responsibility among the citizens themselves and an officially acknowledged governmental organization that would be engaged in handling such matters.

Such an institution could be called “The Office for Mutual Responsibility.”

On behalf of the state, the Office for Mutual Responsibility would be responsible for rescuing every citizen in Israel and around the world in desperate circumstances and finding solutions to the variety of problems that emerge. Every entreaty for help would be satisfied by the force of a potent social atmosphere, orchestrated by the work of this office, to generate positive connection among all citizens.

Currently, there is no such official body in Israel dealing primarily with positive social connection and developing mutual responsibility among the nation’s citizens.

For the most part, Israeli citizens today neglect their relationship with the state, feeling that they owe it nothing—dodging payments wherever possible, and fleeing far away to a distant land if an opportunity presents itself. The general atmosphere is a society of individuals each trying not to be suckers, in a common effort to get the upper hand on others and the state wherever possible. In other words, each person’s sole concern is about himself and how to use others in order to stay one step ahead.

We need to realize as a society that this atmosphere suffocates us.

We have had the highly publicized examples of a soldier getting caught behind enemy lines and a young woman being imprisoned overseas after getting caught with marijuana. In both cases, the parents had to scream loud and long through the media until they garnered enough support to achieve their success.

However, these are the isolated success stories.

Mutual responsibility must become a way of life for everyone, a constant concern for others, and not just a hurried, stop-gap embrace when someone’s need suddenly catches our attention.

Mutual responsibility is a shared sensation of closeness, where we feel committed and belonging to one another—neighbors, colleagues and people on the street—just like we feel toward our own family. I am speaking of responsibility toward all people, society and the state. It is written in our sources that, “Love your neighbor as yourself—it is a great rule in the Torah.” This is the law that should be at the foundation of our society.

Members of such a social framework would need to pay their dues in order to sustain it. Therefore, it would require financial contributions, volunteers, and a general atmosphere of giving, wherever and however a person could.

The Office for Mutual Responsibility would function almost like an educational institution whose duty is to make us all feel that we are one big family. Anyone contributing within such a framework would also be worthy of receiving help from it whenever needed.

It is not enough to expect that by paying our taxes and contributing military service, we are entitled to receive help from the state if we are in trouble. Mutual responsibility requires regular learning and contributing with the aim of building a warm network of the quality of relationships that feel similar to a mother’s constant, loving manner toward her children.

Once we establish such a setup within Israel and provide an example of a well-oiled society operating upon the principle of mutual responsibility, a positive rippling effect would spread such a unique form of connection to the rest of the world. 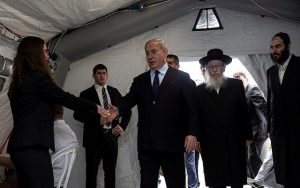 Grasp Where And What You Are