The Times Of Israel: “Jewish Wisdom And The Next Renaissance In Europe” 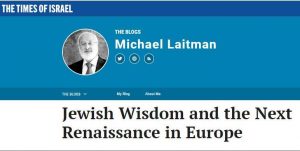 Today’s humanity doesn’t necessarily recognize that the foundations shaping its culture were born in Europe: philosophy, science, art, politics, economics, and language. All of these transformed man from a barbaric creature to an enlightened human.

However, day by day, Europe is sinking. Just this week, after two years of political discussions and crises, leaders of 27 countries gathered in Brussels to finalize Britain’s exit from the European Union. The Brexit is yet another jolt to the common market, which joins the decline in political stability, the loss of European identity, the rise of the extreme right and the waves of mass immigration, all threatening to sink the European ship.

Thus, the human culture that formed in Europe over two millennia, the culture that became rooted in humanity’s DNA and shaped the patterns of thinking that characterize modern society, is now disintegrating. And while it is not yet clear how the future will play out, through the prism of Kabbalah one thing is certain: Once again, the world will set its sight on the Jewish people.

Two thousand years ago, when the Second Temple was at the height of its glory, many from the nations of the world came to visit, to learn from the sages of Israel about the secret of the Jewish people – about the wisdom that brought the Jewish people together as one man in one heart, the wisdom that had the power to weave differences between people into a harmonious humanity based on the laws of nature.

Those students were introduced to the profound wisdom that invigorated the Jewish people. However, based on a limited understanding of it, they created their own distorted versions of the wisdom. Kabbalist Yehuda Ashlag, a.k.a. Baal HaSulam, describes this as follows:

“The sages of Kabbalah observe philosophic theology and denounce that they have stolen the superficial shell of their wisdom, which Plato and his Greek predecessors had acquired while studying with the disciples of the prophets in Israel. They have stolen basic elements from the wisdom of Israel and wore a cloak that is not their own.

Some of the successors of those who studied with the Jewish sages write about it as well.

“The preeminence of Pythagoras was not derived from the Greeks, but again from the Jews. …He himself was the first to convert the name ‘Kabbalah,’ unknown to the Greeks, into the Greek name philosophy,” writes German philosopher Johannes Reuchlin in “De Arte Cabbalistica.

“Sciences such as theology, philosophy and mathematics take their principles and origins from the teachings of Kabbalah. These sciences are inferior to the laws and principles of Kabbalah, hence their arguments are lacking without it.

Founders of the Renaissance movement were also influenced by Kabbalah. Giovanni Pico della Mirandola, an Italian philosopher and scientist who lived in the 15th century, studied Hebrew and became fascinated with the wisdom of Kabbalah.

In his essay “Oration on the Dignity of Man,” Mirandola wrote that “the true interpretation of the law given to Moses is called ‘Kabbalah,’” and noted that “the books of Kabbalah hold the fountains of knowledge and wisdom – the most solid philosophy that explains nature.

His seminal essay later became a manifesto of the Renaissance movement, which has reshaped all of Europe through art, religion, philosophy, literature, education, and more. The Renaissance brought about a dramatic change of worldview, which also led to the scientific revolution in Europe.

The physical presence of the Jews across Europe also brought about many changes throughout two thousand years of exile. In the economic sphere, for instance, the Jews had a significant foothold. Werner Sombart, one of the most prominent figures in social science at the beginning of the 20th century, described how the Jews managed to establish the capitalist system which took root in Europe:

“The people of Israel were like a sun, wherever it shone – new life emerged from the ground; wherever they left – destruction ensued.

But both the indirect influence Europe absorbed from the wisdom of Kabbalah and the direct impact of the presence of Jews who settled in Europe were an expression of a deeper and more significant process. Beneath the surface, an internal bond was forming between the Jewish people and the European peoples. Gradually, a dependence was woven between the evolution of human culture and the wisdom of Kabbalah.

Today, about two thousand years later, this process of connection is reaching a new stage. Human culture is becoming interconnected across the globe. Borders are becoming blurred, the Internet funnels humanity into a single shared virtual space, and humans need a wisdom of connection that is adapted to our generation to unify above their differences.

Since Europe constitutes the foundation of human culture, the need is felt there first and foremost. As the European continent declines, the demand for the wisdom of connection that is rooted in the Jewish people begins to bubble within, and on the outside, it appears as powerful waves of anti-Semitism.

The internal and external pressures directed at Jews in Europe, and all around the world, will push them to rediscover the unifying power of the wisdom of Kabbalah.

“To rediscover and rekindle the natural love within us, to revive and revitalize those nationhood muscles that have not been active within us for two thousand years” (Baal HaSulam).

Once the Jewish people begin to rise to a higher level of human connection, the nations of the world will also replace their hostile attitude toward them with a friendly attitude. As a result, a new Renaissance will emerge – in Europe and across the world.
[237170]

The Spiritual Work Of Each Person

In What Should We Agree With The Creator?
Podcast Powered by podPress (v8.8)