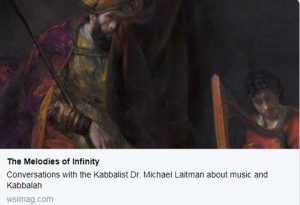 This conversation with Dr. Laitman is a continuation of others that I have had with him, through which I have immersed myself in Kabbalá. I have taken license to spell Kabbalá with the accent at the end in deference to Hebrew pronunciation and thereby leaving intact the bridge to “Rav” Laitman. As a gesture of affection and respect, Dr. Laitman’s students have given him this title, although he is not a rabbi, but a scientist and philosopher.

In the past I heard Dr. Laitman say:

“Music has the great quality of being able to express the connections between opposites. It is able to show emotions in the most abstract way. That is why it is a fundamental part of our life.”

It amazed me that he understands music so well. I learned that, as a child, he played the piano. When I heard him singing a melody, it was clear that although he does not have a trained voice, his pitch was in tune, which denotes a musical ear.

On another occasion he said:

“The composers have an inner ear. They feel their inner world through sounds. There are different styles of music and composers. Sometimes composers are secluded in order to listen to themselves, yet a composer is actually the result of society as a whole. Thus, the difference between a mediocre composer and a brilliant one is the degree to which he is able to feel the pain and hope of society as a whole. This has nothing to do with your spiritual level. A great New Life 532 – Kabbalah Convention, Jump to the Purpose of Creation can also be a savage. A composer has to try to learn the secret of life in order to reach the highest level of composition.”

A student asked him, “What is music?,” to which he replied:

“Music is a language that can express the deepest feelings of a person. It can excite and elevate a person, change a state of mind and the direction of thought. According to his style, music can transport us from one place to another. The music immediately awakens memories in the person and produces special feelings. Words penetrate us through the mind and we are forced to activate a mechanism of comparison, memory.

Music, on the other hand, immediately takes the emotion of memory and awakens it within us, whether we like it or not. Penetrate the person without asking permission. Music connects us with the conditions of the environment in which it is heard: with time, space, movement and events; all this is immediately awakened in our memory along with the sound we hear. Music is the world and everything that fills it.

There is something in musical harmony that is similar to the superior whole in nature. This is the reason why music exalts us. There is nothing threatening in the music and it brings calm joy, tears, and something that is very internal, personal and profound.

All nature plays music and music can heal.”

Over the years, I felt that all those questions of his students were also mine, and yet there were more doubts within me, more than I wanted to ask him. Being so immersed in the world of opera, which is what gives me food, every time I listen to kabbalistic music, I realize how far it is from the physical world, from the world of bodily desires, from the ego world, for its essence is perceived only from our aspirations to a higher world, a world corrected from the defects of the ego. Many times I have listened to the recordings of Rav Laitman’s teacher, Rabash, singing the melodies of his famous father and teacher, Baal Hasulam, but now I was ready to talk with the favorite student of Rabash about the threads that connect to infinity with music. Or is music rather a door?

So it was that the day came when I had the opportunity to talk to him about music during a recorded interview for Israel’s channel 66. The moderator was Norma Livne, born in Latin America, so she and I would speak in Spanish, Rav Laitman would translate to Hebrew and translate what I said into Spanish. I will not make a transcript of the whole program, but I will take the points that seem most relevant to me.

What are the different spiritual states a person goes through when listening to Kabbalistic music?
I do not know. That’s not music, it’s opera. It’s something much more than music, because it includes everything that man produces and creates in our world. It is really the greatest creation we have in our cultural life. Kabbalah gives us all that from within, it can even thrill with simple notes (Kabbalist music), but if the man is directed towards that, he enters the same wave of melody, even if it is the smallest or simplest of wisdom of Kabbalah, the important thing is that this melody brings vibrations to his soul, and then he gets very excited with that, and wakes up inside even though they are simple sounds, but he is awakened by a sea inside, much more than a symphony or an opera. But equally, when I listen to opera, I find myself in a very special impression. Humanity has no greater works, it includes everything that humanity does culturally.

Although I do not come from that world, that’s what I think, that opera is the genre that more and better expresses creation, human nature, the relationship between people; it is the closest thing to what Kabbalah wants to express.

Why does it cause so much emotion?
The opera produces such a great emotion because it really includes everything. First of all, the process itself is slow, very wellcalculated, and very psychological.

Although the story is simple … Cio Cio San, Madama Buterfly, Puccini … Verdi …; History is history but equally, I do not know how to say it, but I think we should teach how opera connects people. I remember when I went to the Moscow or London opera, and I saw those rows of hundreds of people, who are finally just hundreds among millions who do not understand it so much. That is why education is needed, equally for the wisdom of Kabbalah.

Then it was my turn to ask him my question. I felt a storm in my head, so I tried to be as concise as I could.

In a webinar you said that in the spiritual world actions determine what spiritual time would be. Music has structures in which silences are interspersed, that is, moments where nothing happens but is part of the melodic structure, such as pauses or breaths. What is silence in the spiritual world?
Without pauses we could not hear anything. The pause is like the preparation of the Kli, (vessel) and the pauses have to sound inside us no less than the sounds we hear because when I hear a sound and then I hear a silence it is not silence, it is the same sound that begins to work in an inverse way in me, because it produced silence; without the sound there would be no silence. Then silence is that note that I now hear … Now, the silence that comes after belongs to that previous sound and connects it to the one that follows. Because we, in all things, in our words, not only in musical works, we can not without pause, without differentiating the transmissions that we find between one and the other, because in the wisdom of Kabbalah that is the creation of the Kli, of the vessel, of the lack, because I can not correctly hear a silence if there is not a special pause before, and that pause has to arise from the special sound that came before, and then, in this way we feel the message that’s in the melody.

Many of the melodies of the Kabbalists are precisely constructed from the psalms of King David. Now, if the psalms are already a spiritual description, what does the music contribute, or in the psalms text and music are integrated?
Well, we hear that musical works do exist since we do not know when, because people wrote about everything they had before them. For example the harp of King David, we do not really know how he sang his psalms, as he was known as an instrumentalist and as a composer. There is a great difference, according to the wisdom of Kabbalah, in how we listen to the melodies, for example those of Baal Hasulam, who composed many … We use them because in them there is a spirit (Ruach) and that is why we respect them so much, It is part of our study.

Are there melodies for the various spiritual worlds: Adam Kadmon, Azilut, Beriah Yetzirah, Asiah, or is it general and everyone perceives it from its reach?
All the melodies (Kabbalists) are in Atzilut, that is the place where you can really express the whole message, not less than that, that is, also the music and the human voice, which includes all the instruments, have to be already in the degree of Azilut.

Why did Baal Hasulam compose several melodies for the same text? For example on the text of Bnei eijalá composes several melodies. I he expressing things from different (spiritual) reaches?
I do not know, it may be that they are different versions of different states, because the very state of Bnei eijalá (The children of the palace) can come from the side of the major or minor and depends on that, after all it is a state of a special elevation called Shabbat and that comes there in various ways. I think the closest thing to Baal Hasulam is the slow version of that melody, it’s the closest to him, it’s what I feel.

The whole interview went by in a flash and I could have kept asking and asking: What is music really? How does the universe sound? What is the universe? This has been just one small glimpse into this world and perhaps this is all we can digest for the moment.

When I reflect back upon these conversations, I discover now that I have even more questions than before. Perhaps, after pausing, a new desire will awaken and when it comes perhaps we will become closer to the corrected world, the world of the infinite, which the Kabbalists call Einsof (“without end”). We have at least the music of the Kabbalists. Let’s listen to it, and keep asking.

Medium: “A Virtual Jewish Nation May Teach the World How to Live on the Cloud”