The Times Of Israel: “The UN 73rd General Assembly, Simchat Torah and How to Repair the World”

The Times of Israel published my article “The UN 73rd General Assembly, Simchat Torah and How to Repair the World“ 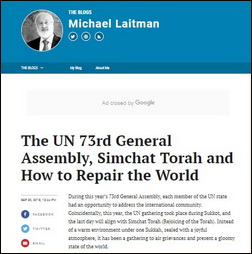 During this year’s 73rd General Assembly, each member of the UN state had an opportunity to address the international community. Coincidentally, this year, the UN gathering took place during Sukkot, and the last day will align with Simchat Torah (Rejoicing of the Torah). Instead of a warm environment under one Sukkah, sealed with a joyful atmosphere, it has been a gathering to air grievances and present a gloomy state of the world.

The issue of living under global governance versus respecting the independent, sovereign rites of nations surfaced as President Trump openly disagreed with the idea of globalism and promoted national independence, using America’s achievements during his presidency as an example of the latter’s success.

Why Unity of Nations Can’t Work Just Yet

Any form of unity that doesn’t focus on correcting egoistic relations is bound to explode. The classic example can be seen in what happened to the Soviet Union. Today’s so-called “European Union” is repeating the same mistake as the Soviet Union, which is, in the name of “unity among nations,” to exploit the nationalistic force of each nation until it is completely sucked dry. EU leaders think that this setup is possible, but it will eventually collapse.

For many years, the United States was treated as a cash cow in this game, and Trump clearly shows that he wants the US out. He sees that there is no future in artificial unity among nations, and he rattles the political atmosphere with a cold, pragmatic and business-like approach to this issue at every opportunity he gets.

Yet, the ideological tug-of-war between economic nationalism and global governance, which has become ever more prominent during Trump’s presidency, has definitely further sparked the questions about what it would take to effectively unite peoples and nations, and reach a feasible integrated global system of trade, financial, economic or social issues. Any shift to a better world would need to successfully address these questions.

On one hand, we are globally interdependent. A basic tenet of interdependence is that if any piece fails, the entire mechanism either stops working or works poorly. Along with the evolution of human society, we have come to realize an interdependent connection is indispensable in order to enable individuals and nations to thrive.

On the other hand, the interfering element in today’s interdependent world is our egoistic attitude: where we each aim to self-benefit at the expense of others. Therefore, in order to impact a transition to happier, safer and more comfortable lives in our interdependent reality, we would need to solve how to mend our egoistic relations.

Moreover, as our further development entails increasingly tightening interdependent conditions, if we fail to realize a shift to positive mutual relationships, then we can expect increasing pressures and crises. Simply put, we need to feel that our life depends on others.

How Does This Relate to Simchat Torah?

However, we do not know what the evil inclination means or moreover, how to correct it. We need a special method through which we can determine what is evil within me and then transform it into good.

We reach the state of Simcha or joy, an exalted spiritual state, from having received the possibility of revealing the Torah, i.e. the wisdom of Kabbalah, the mechanism that gives us the tools for correction. It is also called “the hidden Torah” because it makes visible what is hidden in the person.

Throughout the years, the wisdom of Kabbalah was concealed, waiting for the time of humanity’s ripening to receive it. It is in our generation, when the world needs to be corrected the most, that it is accessible to be studied. And this is what we need to fix our problems, on a personal or global scale.

We cannot expect magical solutions from world leaders. We can only correct the world by correcting ourselves. What we call “evil” is indeed our egoistic attributes which are the opposite to those of bestowal and love that prevail in nature. Our goal should be to attain those characteristics for a joyful life and prosperous future for all.
[234261]