A ten is all that exists in all of reality, in all the worlds. All of creation, which has evolved from the four stages of direct Light, is called one “ten.” Malchut of the world of Infinity, in which there are ten round Sefirot full of infinite Light, is a ten. There is nothing besides it. And the Creator is the Light of infinity filling this ten, Malchut.

Then this system of ten circles, the Sefirot, undergoes all sorts of changes. The program of creation transfers this ten from a round complete state into a fragmented one.

As if to calculate the integral when the continuous surface is divided into an infinite number of squares, the system of ten “circles” is broken to divide the work between multitudes of people, between all parts of the system, so that everyone will complete his or her private work and become similar to the Creator. After all, one cannot do all the work right away in one go. 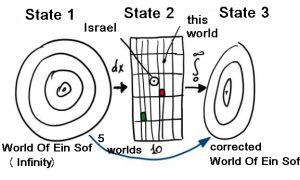 The system is transformed from an “integral” to a “differential,” in which the work is performed in parts. Ten stages of work are distributed among the five worlds and are additionally divided more and more. Each of us performs some kind of work in his cell. As a result, all parts of this work are integrated again, combined into one integral work, like an integral from zero to infinity.

All these breakages, contractions, and descents are made in order to give each fragment its infinity in its completeness from its individual properties.

In the first state, it was impossible to do it because we were all interconnected in an integral, infinite form. It is impossible to shatter the created being that is opposite to the Creator so that it can attain the Creator from its opposite, antagonistic state and leave it “round.” After all, the circle is already perfection, a smaller or a bigger Creator.

Therefore, it is necessary to break this circle to give each fragment different properties, sides, angles, that is, restrictions. Now, from these restrictions, one must begin to attain eternity, perfection, integration, connection of all with all. This gives a feeling of the Creator and true perfection. It is impossible to get into the third state bypassing the second, the shattered one. This is all our work.

It is necessary to strive to get from state 1, through state 2, to state 3. Correction begins when a ten is organized and appears in front of us. That is, the correction began from Abraham, and now each of us at some point falls into a place where he has a ten. This is how the advancement toward the integral, true system of the upper force begins.

It is necessary to get used to this perception of reality. It helps one’s mind get over the feelings, like a patient gets an X-ray image that he cannot argue with—it is a fact, and he has to take medicine and get treated. This is an objective reality that is above our emotions and we must work with it.1
1Minute 0:10-7:33
From the 2nd part of the Daily Kabbalah Lesson 9/12/18, Lesson on the Topic “Dissemination of Kabbalah”

Related Material:
The Ten—A Special Kind Of Unity
All I Need Is A Ten
If I Have A Ten, I Need Nothing Else

Suddenly, The Fog Will Dissipate…