One isn’t judged from above on New Year’s, but he judges himself, how he must be, and he determines his own future. And this New Year is a new turn for him!
One is his own judge, jury, and executioner!
And then, as it is written, there is judgment below and judgment above…

Prayer must be in the heart:
for the heart to be in accord with the prayer for acquiring bestowal (faith) instead of the inherent quality of reception (knowledge).

The Creator’s concealment is in His power over all that happens.

Requests for the New Year: to feel the greatness and singularity of the upper force, the Creator, despite His concealment. To feel His importance and authority in all that happens. Up to each of “our” desires and actions, how they are all controlled by the Creator.
#RoshHaShanah

This is the meaning of the New Year’s prayers. #RoshHashanah

The New Year is the creation of Malchut, a new desire that comprises all the souls, for them to be filled by the Creator, feel His greatness within. We request to feel for the Creator, the desire to love and bestow, to fill everyone and be revealed in all.

One must therefore attain the Creator’s greatness and singularity. And then the Creator will fulfill him.

Man is held by two forces, to receive and to bestow. But one must decide which will rule within him. And not for the sake of a reward in this world or the next, but because the Creator is great in his eyes.

The main thing over the course of life is to acquire permanent faith, i.e., full quality of bestowal over one’s natural desire to receive, the ego.
From this desire and request, a New Year begins in one’s life!
Let us wish this for one another! #RoshHashanah

One’s request determine’s one’s fate.
Though all the abilities are already included in one, the way they are used depends on the path one chooses:
to exert in acquiring this world (riches, power, knowledge)
or to be similar to the Creator, the quality of love and bestowal.

But one can only sense it as sin in contrast with the opposite quality, that of bestowal, faith.
So let’s ask for the quality of bestowal!

#Elul is the time to ask for #forgiveness and release from sin. The ego is the cause of all sin. For as long as the ego isn’t gone from man, all of one’s thoughts and actions are for oneself, a sin.
From Twitter, 9/9/18

I wish all of us what we lack most, love and connection between us!

It has always saved our people, it is in our DNA. “Love your neighbor as yourself” is what we must realize between us for the entire world. 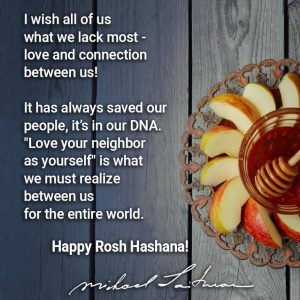 Question: Many times I’ve heard you speak about the necessity of proper upbringing. What is upbringing according to Kabbalah? Can egoism be educated or do we need a properly educated egoist?

Answer: A Kabbalistic upbringing means an upbringing by means of the upper Light. It is when I, along with my friends, with the help of various actions described in the Kabbalistic methodology, attract the upper Light. The upper Light influences us and brings us to a state of unity where the Creator is revealed and where we all become one whole. This is the state we have to reach.

A Kabbalistic upbringing is supposed to unite us under the influence of the upper Light, revealing the Light under the condition that our connection, our mutual bestowal, will resemble its qualities. Then in the union between the upper Light and us, we will reveal its source—the Creator.
[232276]
From the Kabbalah Lesson in Russian 4/29/18

Related Material:
The Proper Education For A Person
Upbringing By The Surrounding Light
Rising Above The Universe

New Life 1037 – Love Of The Nation Of Israel
Dr. Michael Laitman in conversation with Oren Levi and Nitzah Mazoz

Other nations have natural love, but love of the nation of Israel means that each one wants to benefit others and enjoys this. The people of Israel are made up of a gathering of the nations of the world and therefore they have no connection. “National love” means that I must love each one in the nation that aims toward reaching love. A connection between differences is called “Israel,” which means we direct ourselves straight toward the higher integral power in nature. We need to learn to cover over all hatred with love like the forces of plus and minus and then we will attain wholeness and eternity. That is how we acquire the “weapon” of love and then nobody will want to harm us. The “weapon” of love is connection; it has the power to fight against all evil which is separation. There is no need to fight with anyone else but only with the evil that is found within me, only to fight with my own ego. When we relate this way to each other, people will immediately change their attitude toward us in a positive way because we will illuminate the whole world.
[230305]
From KabTV’s “New Life 1037 – Love Of The Nation Of Israel,” 7/17/18

Lesson on the Topic “The Month of Elul And Rosh Hashanah”