The Three Vectors Of Evolution

This wisdom is generally divided into two parallel, equal, and identical orders, like two drops in a pond. The only difference between them is that the first order extends from above downward, to this world, and the second order begins in this world and traverses from below upward precisely by the same routes and make-ups imprinted at their root when they appeared from above downward. (Baal HaSulam, “The Essence of the Wisdom of Kabbalah”)

We study that there are three axes, three lines, three vectors:

The first, a descent from the above downward from the world of Ein Sof to our world.

The second, the evolution in our world.

And the third, an ascent from the bottom upward to the world of Ein Sof, which means correction. 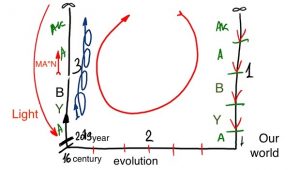 Question: Does this mean that our evolution has ended?

Answer: Not only has our evolution ended, it is reborn. If we don’t ascend upward, we see its maladies, like a fruit that rots if it is not picked in time.

We see that humanity has in fact become rotten. If we look at the time line, we reached the good right state in the 16th century. Today, however, we are in a state in which we should have started our ascent long ago, but unfortunately we are only preparing for it.

A long and demanding road from the bottom upward lies ahead, and everything has already been prepared for it: the wisdom of Kabbalah, books and different tools that explain how we should develop, how to establish a group, how to unite and to gradually reveal the Creator.

Question: What stems from the world of Ein Sof leads to the shattering etc., while what stems from our lowly world should lead to wholeness. What is the Creator’s rationale here?

Answer: The whole process is predetermined from the start in the thought of creation. The upper force enters us and shatters us.

Therefore, selfishness arises. Then, over almost 15 billion years, it evolves. And only then begins its correction, also with the help of the upper force.

But the correction takes place thanks to the fact that you draw the upper force that imfluences you in a wise and sensible way by raising MAN. When you raise your desire for correction, for unity, the light of correction descends unto you.
[253559]
From KabTV’s “Fundamentals of Kabbalah” 8/18/19

Related Material:
Leading The Desire To The Light
Know All Forms Of The Upper One And Conform
On The Border Of The Light And The Kli

Where There Is No Crime Scene