“People Of Israel, Unite Before It Is Too Late” (Linkedin)

My new article on Linkedin “People of Israel, Unite Before It Is Too Late” 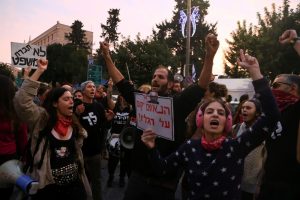 Any period before elections is nasty, and Israel’s campaign before Israelis go to the polls in March to elect the prime-minister is no different. The split is at its peak, the mutual contempt is celebrated while everyone pulls in opposite directions with only one goal in common, to slander the other. The difference between us and other nations is that the very existence of Israel depends on its unity in order to defend itself from all the evil forces that want to annihilate it, including forces within America.

The only period that can be compared to our current one, to get a little estimate of our dismal situation, is the time before the destruction of the Second Temple—days of unrestrained hatred, days of disgust and rejection, days that invite negative forces to dismantle our people.

As long as we fail to collectively turn the steering wheel with all our might to the right track, the deterioration of division will lead us down the slippery slope to a real disaster, to no less than destruction of our society. Behind the current U.S. administration are extremist forces whose ambition is to destroy Israel, to wipe us off the face of the earth, and to impose ideals opposite to the Judeo-Christian tradition. The minions of those forces will swarm to gleefully sign on its behalf to repeal the legal validity of the State of Israel—not with one hand, with both hands!

Therefore, if we do not come to our senses and realize how immersed we are in social sludge and ego that invites sick evils upon us, the situation will deteriorate and the forces of destruction will be revealed. At best, a few Israelis will be able to escape with a one-way ticket away from here.

There is a hard inner core in this administration that is confident in its position and strong in its will, and it is further supported by a number of American Jews who have learned nothing from the darkest period of the Jewish people. History repeats itself.

But just as this threat unfolds, the solution also reveals its hand. Our future fate depends on our knowing how to correctly focus the stronger latent power within the Jewish people: to connect as one man with one heart, above the forces of separation and conflict between us. Coming suddenly face to face with the threatening forces that loom against us, can spur us on and empower us to build and fortify a bond of love between us above all the hate that divides us.

The connection between us will save both us and the whole world. According to the seminal ancient book of Kabbalah, The Book of Zohar, which explains the secrets of the Torah: “Israel is the heart of the whole world, just as the organs of the body could not exist in the world even for a moment without the heart, so all the nations cannot exist in the world without Israel.” Therefore, the people of Israel must function like a heart that abides by the law of loving connection and passes it on to the world—in other words, acts as a light unto the nations.

Israeli brotherly love evokes a positive force—a supreme force over and above all our little individual forces—with the capacity to neutralize all evil. This power corrects, straightens, settles, and organizes reality in an integral and acceptable way for everyone. Only in Him must we trust, only on Him must we lean; this is the short and good way. The long and excruciating way would be to ignore the warning signs and the call for unity between us—the force which has been the foundation of the people of Israel since time immemorial—and to continue to allow hatred to gnaw away at our cohesion until our foundation is undermined and destroyed.

Trump has completed his term as president. He spoiled the people of Israel, gave us billions to sign agreements with the Gulf states and more, but we used those gifts to strengthen our pride, justifying ourselves in hanging on to it. Biden, and behind him Obama, on the other hand, operate along a rigid line. With the help of Iran and the rest of the hostile countries in the Middle East, their thrust will make our lives bitter indeed.

In the days of Trump there was an opportunity for us to wake up, to recover, to positively influence each other without the need for blows to drive us toward unity, but we missed the chance to do it through a gentle influence. Now the field has changed with the new administration and the challenges will grow. As it is written, “permission has been granted to the Destroyer.”

From now on, even the millions of sworn pro-Israel Americans who voted for Trump will gradually flock to the mainstream, join the opposite line and abandon support of Israel. These people are no less antisemitic by nature than others, and now that they do not have to fight for their party, they will not fight for us either. Therefore, the Israeli line must be sharp and uncompromising: we will only succeed if we connect above our differences, and this includes all sectors and small streams within our people. We will only succeed if we lovingly cover all crimes without exception with devotion. Only in this way will we be able to overcome those wanting to destroy us.

It is precisely when everything around us splits, breaks, and is on the verge of destruction that the time is ripe and ready for our connection and unification because the revelation of evil must precede the revelation of good. From the worst place where it seems impossible to find a common ground, there good will grow.

Any evil forces against Israel can be reversed for the better, and the reversal depends only on the unity between us. If we know how to unite as one, then we will align with an auxiliary force that will help us on our way to still the enemy and fulfill our destiny in the world.
[277669]

“One Year Into Covid, And Nothing Has Changed” (Linkedin)
Podcast Powered by podPress (v8.8)