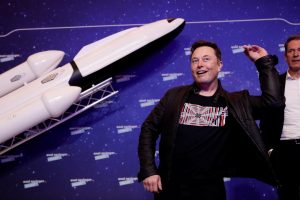 Billionaire Elon Musk, owner of electric car company Tesla and Space Exploration Technologies Corp SpaceX, has a grand vision for humanity. He calls it “Mars & Beyond: The road to making humanity multiplanetary.” Put simply, Musk wants to colonize Mars with humans. Regrettably for him, it’ll never work. There is nothing wrong with Planet Earth except for the people inhabiting it. So, if you carry into your new world the injurious element that is ruining your current world, what chances have you of building a sustainable colony on the new planet?

If you want to succeed in your new home, you must make sure that everything you carry with you is helpful and beneficial. This means that the people who go there will have to be freed of the flaws that make humanity noxious to Planet Earth. But, if you can cure people from their harmful traits so they become beneficial to the environment rather than detrimental to it, what’s the point of taking them to a new planet? The whole idea of moving to Mars was because we ruined earth, but if you can fix the ruinous element in man, we will stop ruining Earth, the planet will heal, and there will be no need to move.

Moreover, Earth is our home. We are made of it; it engendered us; and our bodies contain and need every element that exists on earth, even the most toxic. These elements don’t exist on Mars; survival will be a formidable challenge. In other words, not only are we taking with us the very cause of Earth’s problems—ourselves—we are creating countless new problems by placing ourselves in an environment that was not made to create and nurture humans.

When astronauts return from missions on the International Space Station after a few months in space, their bodies need several more months under medical supervision to readjust to the conditions on Earth. The effects on the bodies of people who will travel to Mars for months, then live on it for years, if not for the rest of their lives, are anyone’s guess, but they will not be good.

However you look at it, besides questionable prestige to the entrepreneur, there seems to be no sense at all in the project of colonizing Mars. If Musk wants to create an idyllic society in a secluded place, it would be much cheaper, easier, quicker to implement, and far less risky to simply buy a small, secluded island and populate it with the participants in his experiment. If they succeed, he will have all the prestige of the savior of humanity, who discovered the secret of turning human nature from evil and abusive to kind and inclusive. If he fails, people will simply go back home and all will be well. At the very least, Musk will be respected for trying.

And finally, Musk recently announced that he would pay $100 million for the best carbon capture technology. The isolated island experiment would cost him much less, and give him much more than carbon-free air. If it succeeds, it will give him an ego free society, a pristine Planet Earth, and a happy and peaceful humanity. If you ask me, it’s a steal!
[277409]

The Whole World Toward The Challenge Of Nature

“No Heroes When It Comes To Covid” (Linkedin)
Podcast Powered by podPress (v8.8)