“Blazes Of Hate Are Hotter Than Fire” (Medium) 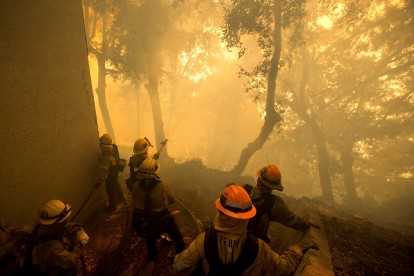 Somehow, the blazes on the West Coast, which have by now spread across the western half of the US from Montana to Texas, seem to have toned down the heated election bickering, the hopeless battle against Covid-19, and even the tragedy that this hurricane season is unleashing in the states along the Gulf of Mexico. But unless we realize that the blazes, the storms, the virus, the racial tensions, and the violence on America’s streets and in American homes come from the same source, things will only get worse, as hard as it may be to imagine.

The hatred in the hearts of too many Americans today is hotter than the blazes that are burning down the country’s most beautiful sceneries. It is setting off storms, setting the streets on fire, and pitting people against each other. Until the fire in the hearts of Americans is put out, the country will continue to fall apart.

A viewer on my Facebook page asked with resentment, “Do you pray for her (America)? Do you pray for your neighbors?” She resented what sounded like admonition and felt as though I didn’t care. I understand why she would feel that way, but the truth is quite the opposite. Since 2002, I have taken at least four long tours from coast to coast elaborating on the future that I saw for America in general, and for American Jews in particular. During all of them, my warnings were met with mockery and condescension. It didn’t stop me from trying over and over. And when I wouldn’t tour, I would write or talk about it — on my own social media pages and on every outlet that would publish my cautions. I am still doing it. Are these the actions of someone who doesn’t care? Would someone who didn’t care go out of his way, invest money, and face derision and accusations that he is unrealistic?

Even now that my warnings are coming true, some Americans choose to focus on the tone of my words rather than on their own actions. Instead of seeing that I am saying now what I have been saying for the past two decades, and that my only aim is to warn them and suggest what I believe will help them, they pick at my choice of words. It would be much more helpful to them if they looked into their own hearts and examined how they feel about each other, since this is the heart of the problem.

This is the truth. I could choose to sweet talk my readers and be a popular person, but that would not be an act of love; it would be fawning in order to win fame or money. Worse yet, it would not give my English speaking readers anything valuable to help them with the mounting crises. My gift was then what it is now: the truth. If you’ve got a blister, burst it while it’s small. It always hurts the least.
So now you know I do pray for America, and my prayer is always the same: that Americans will know the truth and have the strength and courage to act accordingly.

The hatred in the hearts of too many Americans today is hotter than the blazes that are burning down the country’s most beautiful sceneries. It is setting off storms, setting the streets on fire, and pitting people against each other. Until the fire in the hearts of Americans is put out, the country will continue to fall apart.

In the squabbles and arguments over who is right, everybody’s wrong. The only right answer is that quarrels are made in order to rise above them and make peace. Differences are made in order to help us grow up and see more views. As long as we do not understand that we cannot win the social war unless both sides unite above their hatred, and that hatred itself is the only real enemy, the troubles will keep coming faster and more intense.

This is true for America as it is true for everywhere else. But right now, America is burning, drowning, dying by gunfire, and filling its hospitals with Covid patients. And since Americans are aching, my heart goes out to them. I pray for them and wish them the best: to see the truth and to have the courage to unite above hatred.
[271154]

Consulting With The Collective
Podcast Powered by podPress (v8.8)