“Aliens On Our Own Planet” (Medium)

Medium published my new article “Aliens on Our Own Planet” 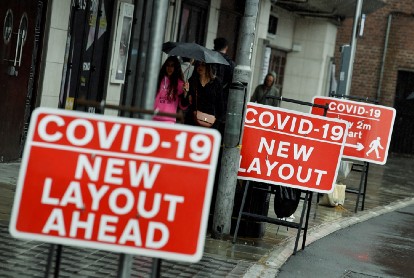 With every passing day, it’s becoming clearer that we’re moving into a new era. The protests against wearing masks are the rebellion of our egos against a compulsory change. Big tech companies such as Google, Apple, and Facebook have already told their employees to keep working from home for at least another year. Everything will change: jobs, banks, industry, education, commerce, human relations, international relations, our whole civilization will turn on its head, and so will we. Only then, the virus will leave.

The exploitative, excessively competitive system where one had to destroy the other in order to survive has exhausted itself.

Both WHO Secretary General António Guterres and White House coronavirus advisor Dr. Anthony Fauci have stated that an effective vaccine is unlikely in the foreseeable future, if ever. In simple words, our lives have changed forever.

Moreover, the more we try to return to the previous “normal,” the more we will inflame recurring waves of Covid. If every time the contagion rate declines we will insist on reopening businesses, we will experience a third, fourth, and who knows how many waves of the pandemic until we realize we cannot beat it. Nature has landed us a knockout, and every time we try to get up and fight, it lands another blow.

But nature isn’t out to kill us; it is out to teach us how to be a part of it, rather than hostile aliens on our own planet. And being part of nature means first and foremost to unite among us, to feel close to our fellow human beings, and in this way learn how to be close to nature. The world we live in is one complete and integral system. To feel its integrality, we need to make ourselves similar to it: integral and complete. And the journey toward it begins at home: with us people.

The exploitative, excessively competitive system where one had to destroy the other in order to survive has exhausted itself. The mindset of survival of the fittest runs contrary to the whole of nature, which operates on the completely opposite principle: survival of the friendliest (Google it). Now it is upon us to build this type of society, and in the process, begin to understand the true nature of the world around us.

No one will help us. As a society, we are egoists and don’t know how to truly care for one another. But we can fake it till we make it, and if we keep in mind that our goal is to build a united, integral system where everyone shares the benefits, we will succeed.

Although deep down we all wish we could go back to our old way of life, even if there were no coronavirus, it would be very unwise to do so. There is already so much hatred in the country that a social collapse, if not an all-out civil war, is imminent. In many ways, it has already begun but it is not yet bloody, and it seems like someone has forgotten to make an official declaration.

But it is not too late to reroute. We can look around us and see that everything consists of opposites that complement each other. Only people think that opposites should annihilate one another, oblivious to the fact that just as in nature, opposites allow each other to exist, so it is with us.

We see the world as flat, a two-dimensional image, not realizing that the same human nature operates all parties, all factions of human society. When we insist on seeing the world only through one perspective, we miss the chance to use the other perspective as a “second eye” and get a three-dimensional view. This is the only way that we can see the full depth and scope of reality, and find what operates the whole picture that we see before us. Only when you can look at the world through both prisms can you see it, so instead of trying to abolish the other viewpoint, we should cherish it, thank it for existing, while keeping our separate perspective.

“The Solidarity Israel Needs To Offer To Lebanon” (Times Of Israel)
Podcast Powered by podPress (v8.8)