“What Are Some Photos Which Deserve Millions Of Likes?” (Quora)

Michael Laitman, On Quora: “What are some photos which deserve millions of likes?“

We would be wise to promote photos and other media that show examples of love, unity, mutual consideration, support and encouragement above all differences, in order to positively influence humanity with such ideals.

The more we become influenced to want to love and positively connect to each other, coming closer to a sensation that we are all a single family, the more we would experienced improved social health, more happiness and confidence, less crime, anxiety, stress, depression, and many other negative phenomena in our lives. 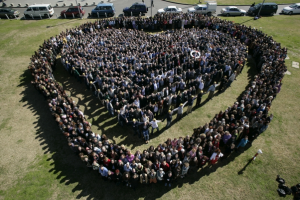 This photo was taken at the 2008 World Kabbalah Convention in Tel Aviv, Israel. Each year, thousands of people gather at this convention from dozens of countries in order to unite above all differences, and by doing so, aim to become as a positive mini-model of humanity.

The method of connection (Kabbalah) starts from recognizing that we are egoistic by nature—we each by default consider self-benefit over benefiting others—and that this egoistic quality is the cause of all our problems.

Therefore, approaching love and unity is done not naively, but as a game: that we set a goal to positively connect above the innate division and differences we feel toward each other—not erasing those divisive sensations, but being aware of them and their source—and then acting out a social atmosphere where we each aim to mutually support, encourage and inspire each other to connect, and feel each other—ultimately, all of humanity—no less than we feel our own families and ourselves.

Playing such a game brings us closer to the fundamental laws of nature: laws of love, giving and connection. We thus awaken a positive influence from nature that helps us feel each other more closely, accelerating the pace of our development to feeling people who were as strangers, to feeling everyone as a single family.

What Do We Gain From The Wisdom Of Kabbalah?

“What Is Kabbalah From A Perspective Of A Person Practicing It?” (Quora)
Podcast Powered by podPress (v8.8)