“Is Macron the European Moses?” (The Times Of Israel)

The Times of Israel published my new article “Is Macron the European Moses?” 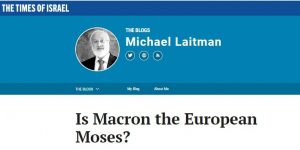 Stability and safety are not synonyms of today’s Europe. A possible terror motive behind the tram attack in the Netherlands where three people died; a Brussels “bomb threat” that was a false alarm but increased the tension near the European Union’s headquarters, forcing evacuation of the building; rampant anti-Semitism and Neo-Nazism across Europe—these are headlines of the European reality these days.

What kind of leadership is needed to fix the continent’s burning problems?

On the socio-political spectrum, after the Gilets Jaunes’ (Yellow Vests’) protest disintegrated France’s capital into a state of anarchy, authorities threatened that such demonstrations could be banned if they turn violent again. As a result of the ongoing turbulence and the failure to contain it, Paris police chief headquarters have been sacked. Within the four months since the movement started opposing fuel tax rises, protests against what is considered the elitist policies of President Emmanuel Macron have already degenerated into riots and vandalism.

Most likely in an effort to try to flip the mounting pressure he is experiencing, President Macron aims at positioning himself as Europe’s leader by advancing the ideal of a unified continent under the catchphrase of the “European Renaissance.” His proposal on how to achieve this lofty goal was recently published in 28 leading newspapers across Europe.

In an open letter to Europeans, he writes that “never since the second world war has Europe been so essential. Yet never has Europe been in such danger.” He suggests the establishment of a European agency to protect democracy in order to combat the phenomenon of fascism on the continent, and a border police force and joint refugee agency for all EU countries in order to improve citizens’ social rights and to facilitate trade among EU members. In addition to these measures, and as part of the push toward unification, Macron criticizes Britain’s Brexit decision to leave the EU.

I happen to differ with the position Macron has taken. Misconstruing the desire for resistance against the social disintegration of Europe as an awakening renaissance of a united Europe, is likely to do more harm than good. Why? It is because, as the sages of Kabbalah have said, “The dispersion of the wicked is good for them and good for the world.” Mishna (Sanhedrin 71b.) The wicked, according to the wisdom of Kabbalah, are actually a group of people who let the egoistic nature controlling them to continue separating them. In other words, the European Union is only a cover for a false unity.

As long as the Europeans do not first restrain and balance their egoism—individual benefit at expense of others—it will be impossible for them to live together in peace, as the hundreds of bloody battles and wars that have plagued them throughout history attest. Without powerful countries like Russia and the United States, and the continents of Africa and the Middle East to put pressure on the European continent from every direction, Europeans would have devoured each other long ago. Those external challenges somehow have forced them into some form of loose unity.

However, Macron’s call for unification amounts to no more than a ploy for economic and political gain. Within this call, I fail to see any modern-day Moses on the verge of leading his people to a stable and safe social order. On the contrary, egoism, as the force behind all of society’s imbalances, increasingly grows among leaders and people in general, not only in Europe but all over the world. At the same time, human society emerges as a global and integral system binding together nations, economies and cultures. Consequently, problems in Europe, America and Asia hold the same common root: narrow and cruel egoism. The solution also remains the same: a method to transcend this egoism through a form of education made to solve specifically this problem. Macron doesn’t possess this.

Until such an educational plan is implemented, those European voices that insist on toughening the laws against criminals who endanger internal European security are correct. Moreover, anyone showing hatred, incitement or violence toward others should be expelled. The liberal approach, which believes that it is possible to assimilate every immigrant through broad-mindedness, is perceived by many immigrants as a weakness that can be taken advantage of. The growing collection of immigrants from diverse nations and cultures is a recipe for increasing agitation unless a proper absorption process is found.

An effective integration process would not necessitate erasing each immigrant’s cultural uniqueness. Instead, each new arrival and European citizen alike would be taught how to unite on a common ground above their differences.

How can the EU be turned into a truly unified block? It can be achieved first of all through a shift of perspective. “Europe As One Family” should be the slogan emblazoned upon the continental flag. This is the spirit of progress that needs to blow in a truly united Europe. If Macron and world leaders want to gain great respect and leave a lasting legacy, they must establish an educational system that will unify all European citizens. They must inculcate such a spirit of unity that would lift everyone up to the feeling that there is no difference between a German or a Spaniard; a Christian or a Muslim; a native or an immigrant. We are all born naked and buried naked, so it is our common humanity that should unite us above all else.

Opportunity To Enter The Upper World