Medium: “Younger People Are Less Sexually Active Today. Why Is That?”

Medium published my new article “Younger people are less sexually active today. Why is that?” 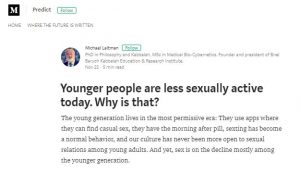 The young generation lives in the most permissive era: They use apps where they can find casual sex, they have the morning after pill, sexting has become a normal behavior, and our culture has never been more open to sexual relations among young adults. And yet, sex is on the decline mostly among the younger generation.

The Atlantic magazine calls this a “Sex Recession” and has devoted the coming December 2018 issue to explore the topic. A 12,665-word article tries to understand the main reasons for the phenomenon, such as an overload of online entertainment that caused a decline in the desire for sexual intimacy, the frequent use of dating apps, which made flirting in public spaces less acceptable, depression, anxiety, low self-esteem and sleep deprivation have all been suggested as reasons for suppressing the desire to have sex.

But rather than seeing the decline in sexual activity as a mere problem, we should see it as an evolutionary phenomenon that is now occurring in the human race.

Drifting with the Growth of Our Ego

The ego is the driving force of human evolution. It is the natural inclination that differentiates the human from the animal world. As the human ego evolves, it drives humans to focus more on their individual needs and desires, demanding a greater and greater benefit in order for an individual to form connections with others. Today, the human ego has reached a peak where it aims to minimize any commitment to others, even when it comes to sexual activity.

The growth of the ego is the fundamental reason behind the decline in sexual activity, and it has major implications on human society. While the decline in sex is evident on the surface, the less apparent decline is happening in the basic drive for courting between the sexes. The urge to please the other, to show our affection towards the other, and to create genuine interest in the other towards us have all lost their importance. As a result, we are losing a very fundamental passion for life and a significant fuel for human activity.

Every human being has a strong need for attention. Men, for instance, instinctively want to impress women, and that shapes a lot of their thoughts and actions, with or without their awareness. Women, on the other hand, need direct attention from men, which can be expressed through a compliment or a certain act for their sake.

However, since our egoism has grown and broadened the gaps between us, human culture also adapts itself, making it easier for the sexes to avoid courting each other, and “get straight to the point.” But not only do we end up being less sexually active, we’re also numbing the reciprocal interplay between the sexes.

Male and Female Are Complementary Forces of Nature

The whole of nature exists in a harmonious dance between its male and female elements of nature — whether it’s plus and minus, sperm and egg, electron and proton, ebb and flow — the two opposite parts of creation are continuously taking on new forms and creating new levels of life.

The reciprocal movement between male and female is where the mind of nature lies. If we acquire this mind, we will recognize the unique and natural roles of both male and female, which are deeply rooted in our biology, occurring in our physiology and expressed in our psychology. While it’s certainly possible to blur the differences between the sexes, it’s impossible to eliminate them.

Moreover, blurring the differences between male and female on the sociocultural level disrupts our perception of reality. Just as the contrasts between darkness and light, hunger and satiation, bitter and sweet, etc. create meaning in our lives and build our cognition, the contrast between the sexes on the human level is critically important to our analytical ability and the way in which we decipher reality.

If we continue to drift with the growth of our ego, without consciously working on human connection, we may find ourselves in a future where babies are mainly created in the laboratory, people develop relationships primarily with robots, and human connection will gradually fade away.

The decline in sexual activity points to an evolutionary crisis designed to lead us towards the next move in our dance with nature. The male and female components of mankind have to evolve in their connection to find a new, deeper, spiritual bond that’s needed to maintain balance in human society, not just between people, but with the whole of nature as well.

While animals maintain their balance by instinct, we humans have to do it consciously. Therefore, we need education to support and drive our spiritual transformation.

As we begin to rise to a new level of human connection, we won’t need to blur our differences because we will see how they merge to create harmony, how our unique qualities complement each other, just as it happens throughout the rest of nature.

This is the connection that’s missing for all of us. Women tend to be naturally more sensitive to this, but men also have the same internal need for the spiritual union that nature has in store for us. As the Book of Zohar writes: “The human is the inclusion of male and female, and the world cannot be built, if male and female are not both present.” Discovering our spiritual connection will restore the balance between male and female at all levels — including sexual activity.
[236968]

Answers To Your Questions, Part 229

The Spiritual Work Of Each Person
Podcast Powered by podPress (v8.8)