Medium: “Why Do We Not Care About A Thousand Dead Indonesians?”

Medium published my new article “Why Do We Not Care About A Thousand Dead Indonesians?” 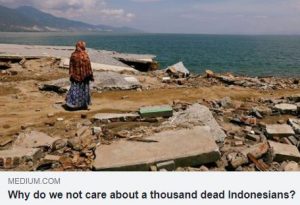 Days after the deadly earthquake measuring 7.5 on the Richter scale struck the island of Sulawesi in Indonesia, and the huge tsunami destroyed large parts of it, the dimensions of the disaster are becoming increasingly clear. Roughly 1,300 people have been killed so far from this disaster, and the death toll could reach thousands.

It seems that the higher the death toll, the greater the indifference in the world. Just to refresh our memory, the earthquake that struck Indonesia in 2004 and the subsequent tsunamis took 230,000 victims. The entire world was mobilized for help, but the current disaster is hardly arousing much sympathy in the world beyond the typical headlines. Hurricane Florence, which hit the South Carolina coast two weeks ago and took a total of six victims, received ongoing media coverage on an international scale.

Alongside the destroyed roads in Indonesia are signs reading “we need food” and “we need help.” International rescue teams find it difficult to operate without proper equipment, tens of thousands of injured residents are in need of treatment. Hundreds of thousands have lost their homes, and in whole areas, hundreds of people are still trapped under collapsed structures. Their voices have gone silent and the rescue forces may never reach them.

The world, which only a month ago was nervously following a nerve-racking rescue of a group of boys outside a cave in northern Thailand, prefers to be occupied with Trump’s and Percy’s speeches.

It’ll be a mistake to think that Indonesia’s influence somewhere in Southeast Asia is remote. We live in an integrated global world, and the various disasters that have plagued us in recent decades illustrate the interdependence that characterizes the global system we live in.

On face value, nations associate themselves with international organizations whose declared goal is the general good, but in practice, they merely advance their own private interests. The World Trade Organization, NATO, the Organization of the Islamic Conference (G8), the OECD, the UN, the EU and even the Internet — are just a few examples of the networks we have created, and yet, it’s all mostly for show.

We lack the awareness that we’re all sailing stormy seas together on a single boat — that the storm is coming and may drown us together. The exploitive competition between us driven by unfettered egoism that characterizes the human race, prevents us from feeling that we are one big family.

However, nature does not recognize international boundaries, does not distinguish between rich and poor, and does not skip anyone. Nature shows us how vulnerable we all are. Ultimately, nature’s system will force us to recognize our interdependence and achieve balance in human society.

Whether we learn it the hard way or the easy way, we will come to see that we’re all one and there’s no difference between Indonesian and American, between European and African, between developed and third world countries. We live together on a single planet, and in the eyes of nature, we are all equal. No one is more important than the other.

Rather than ignoring this reality until it hits us in our face, we can consciously raise ourselves to a higher level of human connection through education and practice. When we begin to do so, our concern for all of humanity will grow and expand, we will naturally find the ways to build a safe, beautiful and good life for everyone on the planet.
[234525]

Is There Disinterested Friendship?
Podcast Powered by podPress (v8.8)