Two States of that Rose

There are two states to that rose:

1) Katnut—the beginning of her formation, in which there is only the Sefira Keter in her, in which her light of Nefesh is clothed, and her bottom nine fall outside of Atzilut, in the world of Beria.

2) Gadlut—when her bottom nine rise from the world of Beria into the world of Atzilut and with them, she is built into a complete Partzuf with ten Sefirot (Rabbi Shimon bar Yochai [Rashbi], Zohar for All, The Rose).

Question: What advice would you give to a new student who finds himself at a Kabbalah lesson for the first time?

Answer: Our Source is called “Infinity” (Ein Sof). From there, through the world of Adam Kadmon (AK), the light descends to the common Tabur (navel). Below are the Partzufim of the world of Atzilut: Atik, Arich Anpin (AA), Aba ve Ima (AVI), and ZON (Zeir Anpin and Nukva). And below them are the worlds of Beria, Yetzira, and Assiya.

We study about what is happening in the world of Atzilut. For us, it is of utmost importance because here is where governance is conducted and where the past, present, and future are contained. It is concluded with the Parsa (border, separating line), which restricts the spread of the light of Hochma (Wisdom).

Below, in the worlds of BYA, are the broken souls, and all the way at the bottom below the common end line (Sium) of the light coming from infinity is our world. Here, we exist in our bodies until we are awakened spiritually.

The souls raise their desire, their appeal for correction, to Malchut of the world of Atzilut. It utilizes the connection with Zeir Anpin and raises the souls’ desire to Him.

ZON obligates “father and mother” to give them all the necessary lights, corrections, and fulfillments and then they return to their place. There, they become “big”; they acquire the adult state of Gadlut. This helps us clarify the meaning of the two states of the rose, that is, Malchut: Katnut and Gadlut.

In the first state, it represents only the point of the upper Sefira— Keter, whereas its other nine Sefirot are below the Parsa. Also, here are the forces of Klipot (filth, shells). This is the meaning of the phrase “a rose among the thorns”: Malchut among the Klipot. It is Malchut’s first, smallest state. 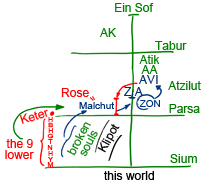 In her adult state, Malchut elevates her lower nine Sefirot, makes a Zivug (mating, coupling) with Zeir Anpin by unifying with him and thereby becomes a genuine rose, blossoming to its full beauty. Malchut can become this way only when her “thorns,” meaning Kelim (vessels) that are unconnected and unfulfilled by Zeir Anpin, ascend to a Zivug with him.

All of this is evoked by the broken souls when they unite together and it is they who bring about the correction of Zeir Anpin and Malchut. Herein lies our entire work: to bring about the correction of ZON until they reach their ultimate state.
[27910]
From the 1st part of the Daily Kabbalah Lesson 11/28/10, The Book of Zohar “The Rose (Shoshanah)”

Related Material:
Invitation to The Bride’s Chamber
A Rose Among The Thorns
The Book of Zohar, Chapter “Rose,” Items 1-3

The Chinese Were Right

Where Do You Find Love?
Podcast Powered by podPress (v8.8)