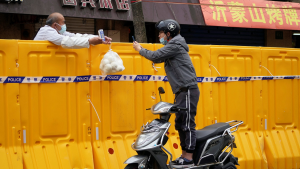 China is running out of food and people are growing desperate. That’s no small problem when more than 190 million residents in some 23 cities are living under full or partial lockdowns enacted as part of the official “zero Covid” policy following record numbers of cases, particularly in Shanghai, the epicenter of the outbreak.

Shanghai, China’s most populous city with 26 million residents, report thousands of new Covid-19 infections daily, the worst increase since the virus appeared in the central city of Wuhan in 2019. China is one of the last remaining nations still committed to eradicating the pandemic, unlike most of the world, which is trying to live with the virus in its Omicron variant.

Shanghai’s strict lockdown impacts millions of people who are suffering from food shortages, some say they are already starving. Parents are forcibly separated from their children who have tested positive for the disease. As living conditions continue to deteriorate with no end in sight, the anger of the population grows. The normally disciplined and obedient Chinese defy authorities through street protests and warn of the consequences, including potential civil unrest.

Indeed, the food shortage could have a major impact on Chinese society. There is nothing more important than food. It is the basic sustenance of any society, literally. Food is our most important need on the scale of human desires, followed by sex, family, money, honor, and knowledge. Rational thinking does not work on an empty stomach, and what controls the mind is the way to satisfy basic needs at any cost.

As a result of the pandemic, the Chinese are certainly going through great changes. They are a people with a very strong foundation and tradition, so any change they go through could be an example for the rest of the world. But can popular social pressure bring about change in China’s governance? Governance is a problem everywhere in today’s world. Countries that expected full hegemony over others are realizing that it is no longer as easy when large masses are poised to oppose.

Governing would be easier if there were a king who ruled according to family heritage, could lead the people, and the people would accept his mandate as part of an agreed lineage. But that is not the case, so people must understand that nature acts as the supreme king. Humanity must get away from expecting great changes from governments and politicians, the earthly level of governance, and realize that there is a supreme realm, the realm of nature, that controls our lives, the virus and everything in reality.

We will be able to abide by this dominion when we realize that we can solve our supply and health problems when we come to terms with the power of nature. We must achieve a balance with it by recognizing that there is a price we must pay for overpopulation and exploitation of our limited natural resources.

More importantly, we need to understand that we cannot continue to exploit others only for our own personal gain without consequences. In the not-too-distant future, both Western and Eastern cultures will have to discover that what humanity is lacking is a sense of mutual responsibility.
[296502]