“Why Is The United Nations So Ineffective?” (Quora)

Michael Laitman, On Quora: “Why is the United Nations so ineffective?“

Indeed, if we look into the stated objectives of the United Nations and the results in the world, then we can summarize that the many meetings and events of the UN lead to no effective results, and it is quite simply a waste of time.

This is because it is not meant to succeed in bringing about friendlier relations between nations, but it rather serves as a platform for international political manipulations and power struggles under the guise of concern for human rights, food and water problems, and climate change.

It might have had good intentions at its establishment, but over time it became a snake pit of political interests, which made it deviate from its stated objectives. Instead of acting meaningfully, positively and effectively, it became a podium for making empty speeches and sanctimonious declarations.

In addition, another reason for its ineffectiveness is non-accountability within the organization: no one is held accountable if its agenda is not realized.

The question then becomes, what could the UN do in order to become effective? 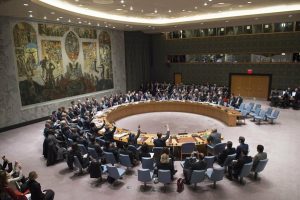 Simply put, it needs to rise above the political interests that have become intertwined into its workings, and operate for the sake of humanity’s common unity and benefit. If it truly functions in such a way, then it should be given the needed authority to enact its decisions.

I think that the UN, the way it currently operates, should be discarded, and in its place should arise a worldwide educational institute that primarily deals with raising awareness of humanity’s interdependence.

Why would I focus on raising such awareness?

It is because, until we each realize the mutual responsibility that we have for our planet, our peace, our happiness and our well-being, then we will continue making ineffective actions that will lead to zero positive results.

People need to realize how to establish and sustain mutual support above the growing divisive atmosphere. Our failure to implement unity above our divisions will lead us into a chasm of increasing problems and crises.

Therefore, to become effective in benefiting humanity, the UN would do wisely to change its course and emphasize the educational aspect of raising interdependence awareness throughout humanity.

What Does The Revelation Of The Upper Force Give Us?