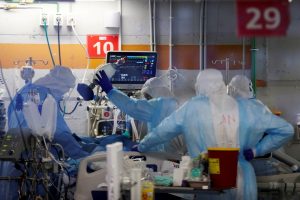 The struggle of medical interns and resident physicians to shorten their absurdly long shifts has been going on for more than a decade. While no person is expected to maintain clarity for more than eight hours on the job, residents and interns, who are entrusted with saving our lives and the lives of our loved ones, are expected to somehow stay sharp and alert for 26 hours straight. And not just once, but throughout their training, which typically lasts four or more years. Such working conditions are a disgrace to the State, which requires them of all medical students on their way to becoming certified doctors, and testifies to the level of our indifference toward each other.

Such conditions are not new, nor are they specific to Israel. Being the son of two doctors, I remember that both my parents were absent for many hours even when I was as young as five years old. I remember my mother cooking food to last for two days, putting it in the stove on a very low temperature to keep it lukewarm, and leaving the house for a 36 hour shift at the hospital. At five years old, I would serve myself dinner, being the only person in the house.

When I say that the solution must be system-wide, I am not referring only to the health care system. The reform must encompass every aspect of our lives. Currently, everything is motivated by money. As the song says, “Money makes the world go ‘round”; this is why our world looks pathetic.

Countries spend enormous amounts of money on medicine, but look where it is getting us. Worldwide, the only area where we spend more taxpayers’ money than medicine is arms. Yet, despite the titanic budgets, public health care is sinking.

Again, it is not only in health care. The same phenomenon is evident in education, welfare, and everywhere else.

The problem lies in our basic motivation. Instead of money, we must establish a care-based society.

Unless we initiate an educational process that teaches people how interdependent we are, we will become so noxious toward each other that human society will disintegrate, at a colossal cost to all of us. If we feel that we are dependent on each other, we will develop care for one another. Even without natural kinship, such as among siblings, the realization that our well-being depends on the well-being of everyone else will make us work for the sake of others. And if we work for the sake of others, we will begin to warm up to them, and from there it will not be long before we become genuinely caring for each other.

A student of mine, who works for a large healthcare organization in Israel, told me that he is permitted to dedicate up to ten minutes per patient. In those ten minutes, even with new patients, he must get to know the person, diagnose the problem, and prescribe drugs or refer to further treatment. This isn’t health care; it’s an assembly line. This is what happens when the motivation isn’t others’ well-being but money, and it characterizes our entire society.
[288497]