“What Antisemites Want From Us” (Linkedin)

My new article on Linkedin “What Antisemites Want From Us” 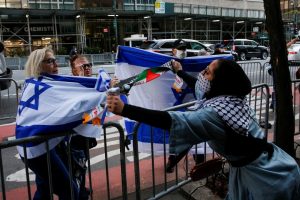 Mass demonstrations with ferocious hostility against Jews and Israel’s right to defend itself are increasingly common around the world as new crowds join the latest global antisemitic campaign fueled by biased media coverage. The establishment of international committees to investigate war crimes on the latest Israeli military operation accompanies renewed existential threats from Iran for the annihilation of the Jewish state. In short, there is a global consensus that Jews are the main problem in the world.

Let’s be clear. This is not about the Israeli-Palestinian conflict, religious fanaticism between Judaism and Islam, intensifying clashes of opinion between right-wingers and leftists, or between Democrats and Republicans. The problem is not focused on the limited area of the Land of Israel either, because the phenomenon of hatred existed long before the establishment of the State and would continue even if we were to emigrate from it to other parts of the world. We are dealing here with a natural phenomenon—antisemitism, a law of nature.

However, this is not just a narrow hatred toward Jews that I speak of, but a broader hatred. Even without Jews on the planet, there would be hatred between each person and others, a vibrant and fermenting hatred between all streams of humanity. The root of the problem is the human ego that is at the core of human society, an ego that grows and begins to consume itself. And the only way to curb it is to correct it.

It just so happens that Jews have a unique method of connecting and being saved from the clutches of the formidable ego that exists in the human race. And this salvation is not just for the Jews alone, but for all without exception.

Because worldwide, we are all connected in a global, integral communication network, every small shift affects the rest of the systems, moving all the networks. Israel is a major hub in the grid of power relations in this globalized system. If its members would repair the bonds between them and transcend the natural egoism, the connecting force Jews would create between them would radiate “light into the nations.” This is the spiritual ideology that the Jewish people were founded upon.

The history of the Jews began in ancient Babylon about 3,800 years ago. Our ancestor Abraham gathered around him representatives from a collection of clans which have today evolved to constitute the whole of humanity. Meanwhile, over the years, Abraham’s adherents have become the people of Israel—a group that worked to discover the power of unity in nature; a team that, for better or worse, has been chosen to implement the terms of mutual guarantee between people according to the rule, “love your neighbor as yourself.”

From the point of view of nature, the change that will take place within the hearts of the people of Israel is the transformation that will spread throughout the world. Because our egoism or self-centered vision constantly grows and neutralizes the sense of danger that hovers over our Jewish heads, even while pressure from the world in the form of antisemitism increases, this notion of our Jewish responsibility to unite and be the role model for humanity to follow is still far from our understanding.

We are hard-hearted and stubborn people. Even while poisoned arrows are fired at us we are unable to believe what is happening and the magnitude of the problem. At the last minute, the “smart Jew” within us always tries to rise up and claim that the situation needs to be studied, digested, and understood, its cause and effect analyzed. A good calculation is made if we think it will pay off. On one level, Jews hear, but by the time that the message truly permeates and becomes real to us, I fear that it may be too late. Hopefully, this current crisis of antisemitic hatred and hostility will be the exception to what has been the rule and we will finally come to recognize the truth that the only chance that we have to ensure our good future instead of being beaten is through our connection.
[283080]

Property Of The Twelve Tribes