“UFOs Or Signs From The Supreme Power?” (Linkedin)

My new article on Linkedin “UFOs or Signs from the Supreme Power?” 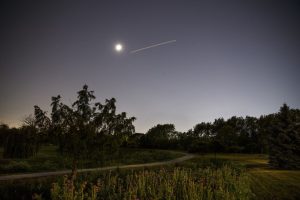 In the late 1970s when I was serving at the Israeli Air Force base, blinking lights hung above us like illuminated lanterns. One might say I’m crazy, but not only did I see them, several hundreds and even thousands of people also recall seeing them for several days and nights. I remember how we talked to each other in amazement: What could it be? What is above us? What shines on us like that? And even though we served in the Air Force we never got an explanation for the phenomenon.

The Pentagon has recently released a detailed report with records of 144 sightings of unidentified flying objects seen in the U.S. over the past 17 years in closed military areas. In America and around the world, people have been waiting for this report for months, hoping to receive an official answer: Is there an explanation for the UFOs? In the end, the Pentagon reports no success in explaining the phenomena and also no confirmation that anything originated outside the Earth. In short, it remains a mystery.

Although I have not read the report, it is clear to me that there are many phenomena in nature that we also do not understand at all. These unidentified flying objects or UFOs are called this way just because their origin and essence are not recognized by us. If we want to recognize and understand these or any other mysterious events, we need to learn how we perceive reality in general, how the world is portrayed in our eyes.

“In our eyes” is actually in our mind. Is reality grasped in our five senses, in our imagination, or does it exist outside of us regardless of our perceptual tools? In general, everyone imagines reality differently. There is no way to know that what one person perceives and what another perceives is the same thing.

From a broader perspective, we would perceive many more forms around us than just those that are observed with ordinary eyes in our sensory perception. Even as you read these lines, many phenomena occur that we are unable to perceive. The question is not whether these phenomena exist or not, but what is it that we want to derive from knowing about them?

Humanity is always attracted to situations that seem out of place with nature, but we are attracted to them in a childish, unserious way, and we tend to produce fantastical mysticism around them. Therefore, humanity derives no benefit from engaging in this type of activity. People simply refer to the phenomenon as aliens landing from a distant planet, from another civilization, and never bother to inquire further and ask what is behind these events. Society is captivated by the alien image of Hollywood—creatures with large oval heads and slanted eyes that arrive at night to kidnap humans. This is no more than a creative invention of human beings.

The wisdom of Kabbalah speaks of spiritual forces that are not clothed in material matter. These forces descend to us from their source, from the Supreme Power, operate throughout the universe, above time, motion, and space, and can be called by the name “angels.” Here too, it is important not to relate these to the fictional paintings from the legends of winged creatures. Rather, these are abstract and transient forces of enormous power similar to magnetic force, electric fields of radiation, or a sort of gravitational field. The forces themselves cannot be seen or felt, but are known only by their action. We feel their manifestation but never the forces themselves.

In order to grasp the wider reality, understand the mystery of life, and discover the powers that surround us, we must strive to begin to grasp the broad picture, the system that encompasses all of us.

If we change our perception of reality—instead of absorbing reality by wanting to receive pleasure only for ourselves, which blocks and limits our tools of absorption—we would act in reverse form, from within a desire to give, in an attitude of giving to others, just as the higher force of nature works.

From this opposite point of perception, we would realize that all the little revelations and sensational observations come from the Upper Force that draws our attention to something that is not exactly within ordinary nature. We would discover that this is so that we would begin to ask more substantive questions about life and discover the true answer, the power that gave birth, sustains and develops the world.
[284255]

“What Is The Best Way Of Evaluating A Person?” (Quora)