“It Is The Turn For Jews In America” (Linkedin) 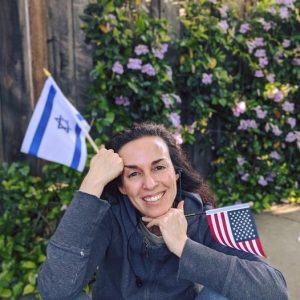 After a decade in Silicon Valley in the United States, Maya Greenberg returned for a short homeland visit to Israel. Maya is a longtime student and active in spreading the wisdom of Kabbalah, someone who helped me a lot in organizing one of the lecture tours I gave across America in 2014 to warn about widespread antisemitism.

Today, mid-2021, I no longer have to warn of the impending danger of hatred against Jews. It is rampant everywhere, from colleges across the US to social media. The voices of hatred toward the Jewish state and toward Jews in general resonate loudly and hostilely.

Like many Israelis living in America, Maya also learned that as soon as Americans hear in the news or read about another Israeli military operation, it immediately ignites a heated debate about the role and tactics of the Jewish state and its right to self-defense. Maya often reluctantly stands at the forefront of information, becoming an ambassador who feels obligated to answer every question that arises.

What the Israelis try to say and explain to the Americans will not really give them a satisfying answer. Maybe at best it will only soften their perception until the next controversy. On the other hand, what the Israelis will say to themselves should be a scrutiny of the highest importance because the fundamental change that the dire situation requires stems from internalization of the bond between the Israelis and the Jews in general.

God forbid, I do not belittle anyone who is not a Jew. Their role is simply different: to awaken Jews to unite. Therefore, the real work to change the current predicaments lies on Jewish shoulders.

In other words, all of humanity is connected in one system of communication, in which Israel is the innermost part, the essence. The people of Israel are like a small world that reflects all of humanity within it. Because of this, Israel is responsible for everything that happens in the world for better or worse.

As Jews, it surprises us over and over again that subconsciously the world feels more than we do that the key to all of humanity’s problems is in our hands. This fact is the origin of the natural, instinctive hatred toward the Jews and the cause for the great pressure on Israel to accept its responsibility to fulfill its role. The fate of the world will be decided by Israel.

If we, Jews, were fully aware of our internal function within the universal network of communication, if we would rise above our egoistic nature, then humanity would also rise to the top of its potential and flourish over separation and hatred. Then the nations of the world would honor Israel, as it is written, “Thus says the Lord God, Behold, I will lift up my hand to the nations, and set up my standard to the peoples: and they shall bring thy sons in their arms, and thy daughters shall be carried on their shoulders.” (Isaiah 49, 22)

On the other hand, if the Jews in America—locals or Israeli expatriates—who are the focus of hatred, abandon their role and let their hearts be washed away by the currents of life and become indifferent to their role to unite, then the pressure of antisemitism will increase, the torments will intensify, and the next blow will be only a matter of time.

Maya paled at what I said. But unfortunately, just as in every period throughout history, bloodshed and bloody events have knocked on the door of Jewish communities around the world; now it is America’s turn.

The Jews in America feel the future is uncertain and there is a reason for that. They are disconnected from their roots, self-centered, only concerned about where to live in peace and comfort under the radar, even trying to shake off their link to Israel. Their connection to Judaism is very often relegated to making three visits to the synagogue per year, showing off their expensive Menorah at home, and paying their annual dues to their Jewish congregation.

The very detachment from the spirit of unity among Jews leads me to expect a worrisome future for Jews in America, a situation that could deteriorate as in those dark days in Nazi Germany where soldiers would roam the streets looking for Jews to pick up and haul to a train station and from there to a local concentration camp.

I expressed this concern at the annual conference of the Israel American Council (IAC) which was celebrated in Washington, DC in 2014. There, too, I tried to explain the many similarities between the conditions that motivated Germany to carry out the Holocaust and the current situation in the United States, which pose a great danger to Jews. I repeat my concerns again here and now.

Unlike during the Holocaust, American Jews still have a chance to be saved. Their unity would eliminate all evil and the antisemitic storm would subside.

Both American Jews and Israelis in America must understand the magnitude of the danger and solidify their connection as a united people who share the feeling of being one society in which a unique force binds them together. American Jews and Israelis in America must support each other, be guarantors for each other, because only reciprocity and mutual care will save them from a gloomy and dire fate. It is not too late to start, but the time to start is now.
[283547]

The Work Of The Creator Is Done By The Creator
Podcast Powered by podPress (v8.8)