“Can Hamas Not Hate Israel?” (Linkedin)

My new article on Linkedin “Can Hamas Not Hate Israel?” 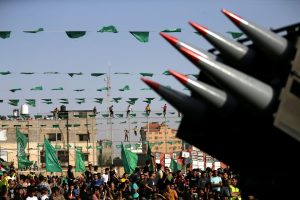 In a recent video that was posted on my Facebook page in Hebrew, I said that if we connect with one another in Israel, Hamas will not only make peace with us, but will also come and help us. The video, as would be expected, got many comments. The interesting part about them was that it got comments from both Jews and Arabs. The comments from the Jews were mainly that it was unrealistic, that we have always been hated and we’ll always be hated. The comments from the Arabs, however, were mainly praises for the truthful words I said, and encouragement to continue speaking about it.

While we weren’t always hated, as some of the comments claimed, we have indeed been hated for the past two millennia, since the ruin of the Second Temple. But then, the Temple was ruined, and the Romans exiled us, precisely because of our hatred for each other. Read every Jewish text on the subject and it will tell you that the only reason that this catastrophe came upon us was our own hatred for each other.

Since the ruin of the Temple, we have not healed the hatred that splintered us, and history shows that whenever Jews became more belligerent toward each other, antisemitism intensified. While it is true that since the ruin of the Temple, there has not been a time without antisemitism, it is just as true that since that time, there has not been a day when we did not hate each other.

Prior to the ruin of the Temple, we did have brief periods of unity, and those were our most glorious days. When we united under Joseph in Egypt, we were given the land of Goshen, Egypt’s most fertile stretch of land. When Joseph died, we broke apart and the Egyptians began to hate us. When we reunited under Moses, we were liberated from Egypt and received our code of law, the Torah, of which the most fundamental tenet is “Love your neighbor as yourself” (Lev. 19:18).

In Israel, we began to part once more and lost the land to the Babylonians. In the exile in Babylon, we united once again because of Haman’s intention to annihilate the Jews. A short while later, we received the Cyrus declaration, which sent us back to the land of Israel with the king’s blessings, the treasures of the First Temple, provisions for the journey, and the king’s support in building the Second Temple. While we were united in Judea, the nations came to learn from us the wisdom of unity: The Torah was translated into Greek, and people from all the nations came every pilgrimage to Jerusalem to watch the miracle of Jewish unity.

Then we lost our unity once more when many in the nation adopted Hellenism. A civil war broke out. When the united Hasmoneans won the war, the mighty Seleucid Empire reinstated our freedom. But that unity was very fragile and short-lived. The next time we fell into internal hatred, we did not recover from it. As a result, the Romans conquered the land and finally drove us out. Since then, we have not recovered from the internal hatred, and since then, there has not been a time without antisemitism.

To understand why our hatred for each other makes the world hate us, we must remember that our ancestors came from precisely those nations that hate us now, meaning from the rest of the world. Our ancestors came from all the nations and united into a nation only when those complete strangers heard Abraham’s message of unity and implemented it with one another, with those people around them, who believed in the novel idea of unity of all nations.

Abraham taught his ideas to his successors, who continued to develop it until, under our greatest teacher, Moses, we vowed to reach the ultimate level of unity and be “as one man with one heart.” The code of law that we received at that time, the Torah, was to help us realize our vow to become a virtuous people, a light unto nations. In this way, people who were originally hateful of each other became bonded at the hearts. Through our own society, we demonstrated that peace among the nations was achievable; we presented an alternative to the enmity that ruled the world until then. This is why the nations loved us while we loved each other.

These days, when the world is quickly sinking into intensifying hatred, humanity desperately needs a solution that will save it from a third world war. Instinctively, the nations look to the people who presented an alternative before, to present the alternative once more. But what do they see? They see the same hatred that has plagued our people for the past two millennia. This leaves the world without hope for a peaceful solution to its problems, since the agents of the solution are not carrying out their duty. The world wishes that we did, but we are not, so how can it not hate us?

The State of Israel is an opportunity for the Jewish people to do its task: to unite and be a light unto nations. This is why if we unite, everyone will love us, as they did before. If we hate one another, as we do today, everyone will continue to hate us and will seek to get rid of us.

For more on this topic, refer to the books The Jewish Choice: Unity or Anti-Semitism, Historical facts on anti-Semitism as a reflection of Jewish social discord, and Like a Bundle of Reeds: Why unity and mutual guarantee are today’s call of the hour.

Europe Can No Longer Be Saved