My new article on Linkedin “A One-Sentence Constitution” 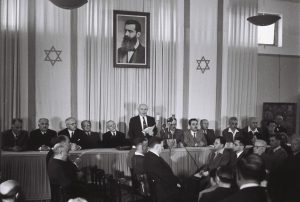 Evidently, the Jewish nation is unlike any other. Even when we want to believe that we are, life, or rather, the rest of the nations, do not allow us to think so. When the State of Israel was established, we sought to run our country according to the rules that seemed appropriate at the time. As a result, we mainly followed the British Mandatory rule, with “leftovers” from the Ottoman rule that preceded it.

Our sages knew this, of course. Rabbi Akiva declared that this was the great rule of the Torah; Old Hillel said to a man who wanted to understand the gist of Jewish law, “That which you hate, do not do unto others,” and countless other references in Jewish writings testify to the centrality of the concept of love of others and mutual responsibility in Jewish law.

The founders of our country were also keenly aware of this law and its vitality to our success. David Ben Gurion, leader of the Jewish community in Israel before the establishment of Israel, and the country’s first Prime Minister, wrote that “‘Love your neighbor as yourself’ is the supreme commandment of Judaism. With these three words [the length of the sentence in Hebrew], the eternal, human law of Judaism has been formed… The state of Israel will be worthy of its name only if its social, economic, political, and judicial structures are based upon these three eternal words.”

Aaron David (A.D.) Gordon, the ideologue and the spiritual force behind practical Zionism and Labor Zionism, echoed Ben Gurion’s words when he wrote, “‘All of Israel are responsible for one another’ … [and] only where people are responsible for one another there is Israel.” And finally, Eliezer Ben Yehuda, reviver of the Hebrew language, asserted that “We have yet to open our eyes and see that only unity can save us. Only if we all unite … to work in favor of the entire nation, our labor will not be in vain.”

Regrettably, we have not built our social, economic, political, and judicial systems on these three words, as Ben Gurion had stipulated, nor have we united “to work in favor of the entire nation,” as Ben Yehuda required, or have become “responsible for one another,” as A.D. Gordon specified. As a result, as a country and as a nation, we are failing miserably. If we continue on this path, we will have no future here. In the best case scenario, we will “escape the discomfort until too few remain to merit the name State, and they will be swallowed among the Arabs,” as kabbalist and thinker Rav Yehuda Ashlag put it. In the worst case scenario, we will be dispersed by force, either through war or through civil war.

If we want to avoid this dreadful, but certain fate, we have no choice but to comprehend that our nation is a spiritual one, and as such, our country must be founded on the spiritual law of love of others: “Love your neighbor as yourself.” This is the only constitution that is suitable for our country and our people, and the only mode of governance that will make Israel a welcome state among the nations.

Even Henry Ford, who loathed the Jews of his time so vehemently that he became Hitler’s idol and received from him the highest award that a none German could receive, admired the Jews of antiquity precisely because their social structure was based upon these “three eternal words,” as Ben Gurion put it. Ford wrote, “Modern reformers, who are constructing model social systems … would do well to look into the social system under which the early Jews were organized.”

Today, the paramount task before us is to establish such education in the nation that will lift us above all our disputes and quarrels and establish unity, mutual responsibility, and indeed, love of others in the nation. And since hatred is so entrenched within the nation, this education must encompass the entire nation, on all its factions, equally, and apply to all ages. We must reform our society from one where envy and hatred govern, to one where support and love set the tone until we realize the tenet “Love your neighbor as yourself” in practice. This is Israel’s only viable governance.

Connection Is The Main Law Of Nature

“What Is The Creator Of Life?” (Quora)
Podcast Powered by podPress (v8.8)