My new article on Linkedin “Jews vs. Israel” 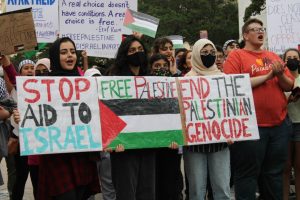 It is nothing new that Jews are campaigning against the State of Israel. It began with various Orthodox groups that objected to the founding of the Jewish state, and is continuing now with groups such as Jewish Voice for Peace, or individuals such as Noam Chomsky, Bernie Sanders, and others. Recently, the campaigning of Jews against Israel has even come to the corporate world when a group of 250 odd Jewish employees of Google signed a letter urging its CEO to recognize “the harm done to Palestinians by Israeli military and gang violence.” The signatories also “object to the conflation of Israel with the Jewish people,” declare that “anti-Zionism is not antisemitism,” and demand, among other things, “the termination of contracts with institutions that support Israeli violations of Palestinian rights.”

In some sense, I do agree with them, though not in the sense they would probably hope I would. Indeed, we, Israelis, are not conducting ourselves as Jews. The word Yehudi [Jew] represents two things: 1) our origin, the ancient kingdom of Yehuda [Judah], whose capital was Jerusalem. 2) Yechudi [united/unique], meaning the aspiration for unity, for oneness. This is why the Jews made the tenet “Love your neighbor as yourself” their foremost commandment. Because today, we are so far away from unity, I agree that we are not conducting ourselves as Jews.

When Abraham began to assemble people around him and form the nucleus of the Jewish nation, there were no Jews. There were Babylonians, where he lived. Abraham spoke to them and called on them to unite. He invited everyone, indiscriminately. In Mishneh Torah, Maimonides writes that Abraham “began to call out to the whole world … wandering from town to town and from kingdom to kingdom until he arrived in the land of Canaan … When [people] gathered around him and asked him about his words, he taught everyone … until he brought them to the path of truth.”

Therefore, if we are not united, we are disconnected from the heart and soul of Judaism, from the very meaning of being Jewish. And if we are not calling on the whole world to unite, as did the father of our nation, Abraham, we are not carrying out his legacy. So in what way are we Jewish? And if we aren’t really Jewish, then what is our claim on the land of Israel?

We can do more than silence our critics both within Judaism and among the nations of the world; we can bring everyone to support us, including Hamas and anyone we currently perceive as our worst enemy. But for this, we must first stop hating one another and start living up to Abraham’s legacy of unity and oneness.

And we must begin with each other. Saying we want to unite with all the nations, while at the same time vilifying, pillorying, and demonizing our own people, exposes our insincerity. When we unite with one another, above all the current divisions among us, the nations will believe our candor and gladly join our efforts.

The worst antisemites in history, such as Adolf Hitler, Henry Ford, Vasily Shulgin, and countless others, all wrote about their contempt for Jews because of their hatred of each other. Objecting to the security, and even existence of the State of Israel, sends the world a message of internal division, and the world responds accordingly—with disgust toward us. No other nation denies its own right for sovereignty, and no other nation places its own people last in the list. By doing so, we are not appeasing the nations’ anger; we are increasing it and turning it into hatred since we are proving that we are not striving for unity. Only if we return to our roots, the aspiration for unity, we will win the world’s favor and support.

Our nation was created so as to be an am segula [a virtuous nation]. Our only virtue is our unique unity, when people of diverse backgrounds, faiths, and cultures have united into a single nation, as did Abraham with his disciples. Without being a virtuous nation, there is no benefit to the world from our existence, and it wants to do away with us. This is what we are beginning to experience more vividly today, and it will continue to escalate until we understand the message and adopt the virtue of unity and oneness, or suffer the consequences that our nation has suffered so many times before.
[282974]

Who Paints The Picture Of The Universe?

“What Is The Greatest Pleasure In The World?” (Quora)
Podcast Powered by podPress (v8.8)