An Amazing Adventure: Attaining The Purpose Of Creation

Question: Why did the perfect Creator create place for the dense tales of simpletons in His design? If it were not in the design, it would not exist in our world either.

Answer: Initially, the Creator created the light, which contains everything formed by Him and is under it. 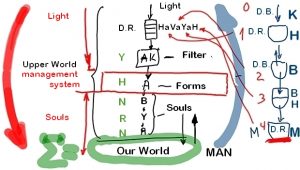 Each upper level includes all lower levels, so the upper light includes the whole plan of creation, its goal, the method of its implementation, and its ultimate state.

Everything in creation exists in this light in the form of a very precise original record. Just as in the human genome there is everything that can be said about men’s past, present, and future. If we took all the genomes from all the people and connected them correctly, we would know everything about humanity.

It is the same regarding the upper light; it contains everything.

Question: So it is the ultimate scenario that contains all records?

Answer: Yes. Now everything is revealed to us as if we are at a certain stage along the path (to give us the illusion of freewill), and we supposedly have to reach this goal by ourselves.

But when you move forward, your own path opens for you because you are given “obstacles,” which you seemingly overcome and thus acquire a new feeling and begin to understand the Creator, to justify Him, identify with Him, and this is already worth something.

As a result of going through this path, we become aware of who created us, what He has done for us, and we feel immense gratitude.

But everything is predetermined, of course. Everything initially exists in its ultimate form. But by discovering this, we perceive everything as a great adventure.

Even when we watch some movie again and already know the end and what leads to it, we still enjoy it. Moreover, the second time we watch it, we enjoy it even more than the first time.
[246304]
From KabTV’s “Fundamentals of Kabbalah” 2/10/19

Related Material:
The Purpose Of Creation And The Development Of Desire
Why Has The Creator “Destroyed” The Ideal State?
Bringing The Worlds Closer

All The Criminals Of The World—In One Person

How Do We Achieve Perfection?
Podcast Powered by podPress (v8.8)