Israel’s Independence Day often invokes reflections on the meaning of independence and whether we are truly independent. Evidently, we are not independent economically. In a globalized world, no country is independent, much less a country whose economy relies so heavily on export and import. Israel is also not independent in the military sense or in the diplomatic sense, since we are dependent on America’s support in both these aspects.

Yet, these three facets of our nationhood have never been the decisive factor in our being. Our strength was never in our economic, military, or diplomatic fortitude, but in our unity! The Jewish people formed when Abraham united people from all over the Fertile Crescent around the principle of love above all differences. The ancient Hebrews achieved independence from their innate hatred of each other and formed a nation that was based on love of others regardless of background, ethnicity, or faith. Only when Israel achieved this level of union and pledged to be “as one man with one heart” they were declared a nation. When Israel abandoned unity, they were exiled from the land of Israel.

Now that we are beginning our 73rd year of renewed sovereignty, I hope that this will be the year when we finally achieve true independence—from hating one another. Today, our very lives depend on this. 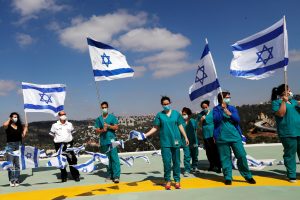