“The UN Partition Plan And The Rebirth Of Israel: Where Are We Now?” (The Times Of Israel)

My article “The UN Partition Plan and the Rebirth of Israel: Where Are We Now?” published in The Times of Israel. 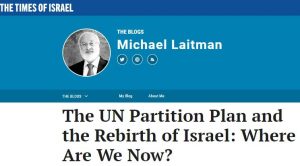 71 years ago, masses of Jews in Israel and the Diaspora gathered around radio transistors, fascinated by the most dramatic vote in Israel’s history. After long nerve-racking hours, in November 29, 1947, an American announcer’s concluding statement sliced ​​through the tense silence: “33 in favor, 13 against… The proposal is accepted.” The establishment of the State of Israel was declared.

If you would ask the previous generation of Jews where they were on November 29, 1947, one would answer with a memory of the burst of joy, dances and hugs, and another would cry, recalling their Holocaust story of survival. They would reminisce how cars honked, horns blew and cheers rose in the streets, and how the dream of a Jewish state took shape before their very eyes.

On the night of the announcement, we felt together, united as one. Since then, however, we have gone through 71 years of regularly surfacing wars and internal conflicts. We certainly have achievements to be proud of: a flag and an anthem, an army, an air force, and a flourishing hi-tech industry. Yet, have we become what we dreamt of, i.e. one people, whole, united, with an independent and free country? Also, what if there would be a vote at the UN today about whether or not the State of Israel should exist? Would anyone be willing to sign a similar resolution today?

There is an abyss between the dreams of the past and the reality of the present. We lost something significant along the way. Although we returned to the Land of the Patriarchs after 2,000 years of exile, and tried to renovate a Hebrew culture within its borders, our efforts have been insufficient. After 71 years, we have failed to find the bond among Israeli society and Jews worldwide that would make its initial moment of joy complete and lasting. Moreover, voices of resistance to the existence of the State of Israel get louder from one year to the next, claiming that the Jewish state has completely lost its right to exist and even call for its boycott.

With all due respect to the United Nations, the justification for the existence of the Jewish state was created when our patriarch Abraham gathered a number of students from the Babylonians who had a desire to discover life’s source. Together, they discovered the method to transcend to a higher level of existence, which was characterized by peaceful bonds of love, unity and mutual responsibility above each individual’s inborn differences, which balanced this group with nature. That is, as nature operates according to laws of interconnection and interdependence, Abraham’s method revealed how people could rise above their differences, connecting on the same level of interconnection and interdependence as nature itself. Therefore, the realization of Abraham’s method and its transmission to humanity is the mandate we received from nature, both for our existence as a nation and for the people of Israel.

The long years of exile have alienated us from living according to Abraham’s method, and we have existed as any other nation. However, toward the end of the 19th century, a remarkable change took place. The Jewish people began to feel a strong need to return to their land and establish an independent state. With perfect timing, Abraham’s method—the wisdom of Kabbalah—also began to be rediscovered to all. In that context, Rav Yehuda Ashlag (Baal HaSulam) and Rav Kook, the great Kabbalists of the 20th century, determined that our independence as a Jewish State depends directly on the attainment of our independence from our corporeal life of differences and divisions. “As long as we do not raise our goal above the corporeal life, we will have no corporeal revival because the spiritual and the corporeal in us cannot dwell in one basket, for we are the children of the idea” (Rav Yehuda Ashlag, “Exile and Redemption“).

In other words, it is impossible to build an Israeli society based on values ​​and principles stemming from our inborn, corporeal and egoistic natures, even though it seems as if we succeed in other countries. We returned to the Land of Israel for the sole purpose of building a society bonded by threads of love, unity and mutual responsibility above our inborn egoistic traits, and then to pass this ability to unite above differences to humanity, who indeed feels the increasing need for such unity in our times. This is the only justification for our existence in this land.

71 years after the most dramatic vote in Israel’s history is a time when anti-Semitism lifts its ugly head. At present, unfortunately, our main unifying element is our common fear of our enemies. Instead of unifying out of our characteristic positive, creative and innovative thrust to implement the method of unity that our ancestors once realized, we instead experience a negative, passive and transient form of unity only at times of anti-Semitic threats or attacks.

However, we needn’t despair. We should use this broken reality as an epic opportunity to rebuild our shared life as a nation on solid foundations sustained by what originally united us. If we want to celebrate like we did 71 years ago, we can do so by realizing our unique potential to unite above our differences. Until we do, anti-Semitism will continue intensifying as the world waits for us to unite and invite everyone into an expanding circle of unity and love, in balance with nature.
[237468]

How Do We Organize Ourselves For Prayer?