“The Psyche of the Jewish Antisemite” (Linkedin)

My new article on Linkedin “The Psyche of the Jewish Antisemite” 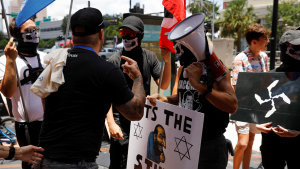 For the past 19 years, a Jewish man has been protesting outside a Michigan synagogue nearly every Sabbath. What began as protesting against policies of the State of Israel has gradually morphed into signs that read “Resist Jewish Power,” “End Jewish Supremacism in Palestine,” and the support of a Nazi German who wrote a book titled The Hitler We Knew and Loved. The fact that he received Jewish education, by the way, that he had a Bar Mitzvah and attended Hebrew school, makes no difference whatsoever. I cannot say that it surprises me to see that some Jews hate their own faith. Because of our unique history and calling, there is a latent antisemite within every Jew.

I have had the questionable pleasure of meeting, not to say encountering quite a few such people. With some, especially those who belong to certain extreme Left organizations, I filmed several televised conversations. It is impossible to reason with such people; they feel what they feel, and that’s the end of it. Once the antisemite within takes over, it is very hard to topple it.

At the same time, during the destruction of the Second Temple, Jews inflicted on each other cruelty that shocked the ancient world. In fact, the animosity among Jews was so intense that to this day, our sages attribute the destruction of the Temple and the expulsion of our people from the land of Israel not to Titus and his Roman armies, but to the people of Israel’s own hatred for each other.

These Dr. Jekyll and Mr. Hyde inhabit every Jew because our ancestors came from regular, self-centered people who acquired sublime qualities of love of others and solidarity, after which they were instructed to build a role model society that will be “a light to the nations.” That was the original people of Israel.

But developing a “better self” did not erase the primordial one. On the contrary, to make Israel continue to improve themselves, their self-centeredness intensified continually. As a result, when they triumphed over their reprehensible selves, they rose to new highs. But when they fell, they fell to new lows.

Approximately two millennia ago, the evil Mr. Hyde within us won a major triumph, and the people of Israel destroyed each other and weakened themselves to a point where the Romans could overtake the city that was decimated from within. Since then, we have not been able to restore our solidarity and mutual responsibility, our love of others, and our concern for humankind.

Moreover, when the kind Israel within us awakens, it often agitates our evil selves and we vehemently resist it. This is when Jews turn against their own people and become antisemitic.

There is only one remedy to the condition of Jewish self-hatred. It is the same remedy that our ancestors used when they established our nationhood: to go all out against our own ego and unite despite our mutual dislike.

We can develop love only if we first feel hatred and become motivated to emerge from it. If we feel no hatred, no burning anger, what will motivate us to feel love? And without motivation, nothing within us will change. Therefore, we must relate to our hatred not as a reason to reject each other, but as a calling to connect, to strengthen our bond.

Perhaps now that many of us feel hatred for their own people, we can begin to nurture the love that our ancestors felt above their hatred. Perhaps now, we, too, are ready to become a light to the nations, a flare of unity in a world darkened by hatred. Perhaps, and perhaps not yet. But sooner or later, the world will demand that we deliver on our oath to be a virtuous people, and the only virtue that we need is our insistence on unity above any division.