“The Clash between Islam and Judaism” (Linkedin)

My new article on Linkedin “ The Clash between Islam and Judaism ” 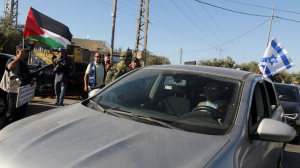 The never-ending clash between Israel and the Islamic world is far deeper than a dispute over land or territory. The ultimate purpose of Islam is to rule the world. It may take years, decades, centuries, or millennia, but the ultimate goal is for Islam to govern the planet. They have patience, persistence, devotion to their faith, and as we can see, Islam is making headway the world over. Jews, on the other hand, have no ideology at all. Currently, our only ideology is to indulge in selfish pleasures. But at the basis of our nation lies a unique idea that neither Islam nor any other religion can accept: love of others as much as one loves oneself.

Currently, Jews do not give a second thought to this idea; they are as afraid of it as any other faith, if not more so, since they are the ones tasked with spreading it around the world. But Jews, as we said, are immersed in the exact opposite of love of others, and therefore no one spreads this notion today, and this is what our world looks like: a planet whose inhabitants fight against each other to the death.

Because our current way of life has nothing to do with our vocation, and everything to do with indulgence, the tendency among Jews in Israel is to seek a quieter place elsewhere. When Zionists first came to Israel, they believed that our historic homeland was the place where we could build a safe haven for the Jews. We did not look for a place where we could realize our calling—to love our neighbor as ourselves and become a light of unity to the nations. Instead, we only sought a place where we would not be slaughtered and persecuted.

In the first years of Israel’s existence, there was an intense feeling of existential threat. This made us come together whenever the conflict with our neighbors became violent. Over the past several decades, we have come to realize that our enemies are not strong enough to annihilate the Jewish state. They can hurt us, but they cannot demolish the country.

As a result, we turned once more toward indulgence, just as we did while we were in the Diaspora. Since the modern State of Israel was not established on the ideology of mutual responsibility and love of others, but as an attempt to find safety, the minute we did not need unity as a means of survival, we threw it out the window.

Now, our enemies rejoice when they see us clashing with each other. They know that if they are patient, we will disintegrate from within and they will not need to fight against us on the battlefield.

If we want to have a foothold in the land of Israel, we must rethink our reason for being here. Israel is no longer considered a safe haven. Even for those who do come here for reasons of personal safety, it is no longer a strong enough motivation to remain here. The future of the country depends on understanding the real purpose of the Jewish people and embracing its vocation.

The “ideology” of the Jewish people is love of others. This was the basis of our peoplehood when we first became a nation at the foot of Mt. Sinai. Therefore, only if we strive for it do we merit the title “people of Israel,” and the right to live in the land of Israel, the land of the people who strive to love each other as themselves and set an example that will be a light to the nations.

We currently have no idea about our vocation, yet our existence in this country depends on knowing it. Therefore, educating ourselves and our children about the meaning and purpose of the Israeli nation is vital for our future. If we want to win the ideological war with Islam, then just as they are taught to hate Jews from infancy, we should teach our children to love others. If we bolster our solidarity and increase our unity, no enemy will stand against us.

Real Judaism is not about services and customs. Real Judaism means rising above our selfishness, uniting above the ego, loving (or at least striving to love) each other as ourselves, and doing these in order to be a light to the nations, to set an example for the world.

“Bring Back the Pioneer Spirit” (Times of Israel)