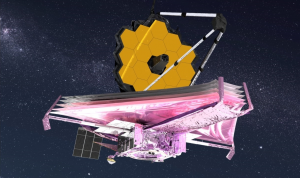 The James Webb Space Telescope (JWST) is set to replace the aging Hubble space telescope. If all goes as planned, it will begin to “unveil the first science-quality images” next month, according to space.com. A CBS News story explains that Webb is 100 times more powerful than Hubble, and can detect the heat signature of a bumblebee from as far away as the moon.

For scientists, it is a cause for celebration. “Webb was specifically designed to allow us to see those very first galaxies that formed after the Big Bang … It’s like we have this 14-billion-year-old story of the universe, but we’re missing that first chapter,” said astrophysicist Amber Straughn in an interview for “60 Minutes.”

I have no doubt that the images will be stunning and new revelations are imminent. But even if we could look back to the moment of the Big Bang itself, we would not find the forces that created the universe, and as a result, created us.

These forces come from a higher realm than the material one, which is confined by the limitations of self-interest. When there is no self-interest, nothing limits these forces and they can connect in a way that engenders life.

Only forces that are higher than self-interest can create life. Forces that are bound by an ego-centered perception cannot create anything; they can only absorb. Just as a mother’s creative force of life is her love for her child, whom she loves even prior to conception, the forces that create life are forces of giving, without a hint of self-absorption.

When we create relationships based on an approach that corresponds to the forces that created the universe, we can discover them. Just as a receiver of radio waves receives them by creating similar frequencies within itself, when we create a “frequency” of transcending our own ego, we discover the forces that exist on that “wavelength,” and we can study their nature, behavior, and power.

Such forces, which transcend the ego, must have an object toward which to aim. This is why it is imperative that we discover them through collaborative work.

When we reveal these forces, we will understand how to correct the errors in our behavior and how to adjust our lives to the forces that create life. At that time, we will be able to build our societies in a manner that is sustainable, safe, and satisfying for everyone.
[298789]

How to Tune Nature to be Kind to Us?