My new article on Linkedin “Waving the Flag of Jewish Unity” 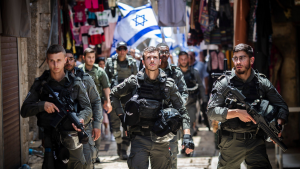 Jerusalem is a city like no other, there is a constant source of tension about its sovereignty. So, an event such as the Flag March, which celebrates the city’s 1967 reunification, drew requests from both the U.S. Administration and the European Union to re-examine the route of the march in order to prevent escalation after weeks of heightened tensions between Arabs and Jews.

Allegedly, Israel decided to stand on its own, to stay firm on the route it had set and to not show weakness. But is this really a test and indication of Israel’s strength? Definitely not. If Israel had stood its ground, it would have marched through Jerusalem as planned without blinking, without looking at anyone in advance, and without considering world public opinion. A strong Israel would not consider changing its course and would not take into account every bit of chatter that stood in its way.

A great and strong person who is confident in his or her values, manners, and lifestyle does not need to demonstrate anything to anyone. That person does not have to raise a flag to prove his or her righteousness to others. For what purpose? If we are firm in our own minds, we do not hesitate back and forth, do not consult or base our decisions on external actors overseas; we simply perform, period.

Israel is not firm enough. It allows haters of Israel to sit on committees that make decisions against the interests of the Jewish people. It allows territories to bargain from north to south. It satisfies every sector of the political spectrum that pulls hard enough for the benefit of its supporters.

Instead of standing up for itself, strengthening the people and the state in a consistent and correct way, Israel deals with symbols while compromising on fundamental and internal values.

I have no objection to going out dancing with the flags in the alleys of the Old City, but in order to truly celebrate the unification of the capital of Israel, we must first establish for ourselves the conditions that we celebrate as a supreme value for us. The heritage that we would never consider selling or replacing it for a pot of lentil stew. And right now, the opposite is happening. Since this is the case, what good is it for us to march and wave the Israeli flag for a few hours?

A flag is an external symbol and nothing more. The Book of Zohar has a long and famous article called, “The Flags,” which describes in depth the inner concept called the flag. This deep understanding is exactly what we are missing—how to raise a flag in our hearts, how to stabilize within ourselves a common inner feeling, how to be enveloped in one flag which expresses a feeling of one people, and to radiate this unity to the world.

My mentor Rav Baruch Ashlag, Rabash, wrote that the word flag derives from the Hebrew word dilug, meaning “skipping,” that is, skipping from our egoistic nature to a second altruistic nature that takes others into consideration. To reach such a spiritual level we first need to soften the heart. In order to soften the heart, we need education and information to help us clarify for ourselves the necessity nowadays of reaching a mutual connection. And to teach us how to reveal the secret of our strength—that when we unite, we grow stronger and draw the Supreme Force, our root, and receive supreme inspiration.

Only out of solidarity will we gain the ability to see the future correctly, will we understand what we live for, and will we know who we are and what our role is in humanity. From such a place as this, we will be able to make the correct decisions about our life together in the Land of Israel. The Supreme Force will raise us to levels we have never before dreamed possible, will give us strength and confidence—strengthening and embracing between us—and will open within us, most important of all, a new mind by which to manage our good future.

Our national goal is not merely concerned with the borders of the Land of Israel and the Jewish people, but with the correction of the Jewish heart that must expand and reach a world correction, that must bring all the nations of the world into a situation where all of us are connected as one man in one heart, just as our sages wrote. That is to say, on this upcoming day all the world will be bound in love and wonderful wholeness. About this reunification we must certainly wave our flags!
[298419]

The Devoted Love of a Flower for a Bee