“The Balance A Year After The Abraham Accords” (Linkedin) 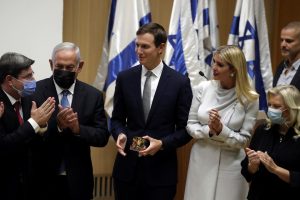 A bilateral agreement between countries is always better than no agreement. A year since the signing of the US-brokered Abraham Accords for peace and normalization of relations between Israel and Arab states, the question is how have they truly transformed the region and how in particular has Israel benefited from it?

The Israeli parliament, the Knesset, celebrated the first anniversary of the pact with the launching of a new caucus dedicated to the Abraham Accords. The aim was to strengthen the ties between Israel and the Gulf states, Bahrain, Morocco and Sudan, from an economic and tourist perspective. The commemoration was followed by a trilateral meeting in Washington between US, Israeli and Emirati officials.

It is good that the State of Israel, which endures hostile relations and is under constant existential threat from its neighbors, continues to preserve the agreements and its tenets. It also serves as a good yardstick for other countries who contemplate reaching out for peace.

We could have benefited much more from relations with the Arab Gulf states, and with the Middle East in general if only we had been more united and stronger among ourselves. Within Israel there are so many opposing and divided forces, each one disqualifying the other and preventing the other from succeeding, even when it comes to crucial agreements upon which the future of the State of Israel depends.

This is the way of the egoism—benefitting at the expense of others—that acts in us naturally and grows incessantly. Even 3,800 years ago human egoism brought us to a significant division. The inhabitants of the ancient kingdom of Babylon were self-centered and divided, which culminated in the construction of the famous Tower of Babel. This “skyscraper” symbolized the egoistic urge, the pretentious thought of the Babylonians that they had the power to reach up to heaven and control nature, even the supreme force of nature.

Abraham, our father, who recognized the egoism and its tendency to lead to serious trouble, gathered a group of people under his tent and taught them the doctrine of life—the method of connection. From this group of disparate residents of Babylon, the people of Israel were founded as a nation.

Abraham taught anyone who was interested how to reach cordial agreements between them, how to transcend conflicts that separate people, and to connect with love. He explained that from the desire to unite with each other in friendship the positive force that exists in nature arises, a unifying and connecting force. It is this supreme force of nature that elevates human beings above the miserable egoism and binds them together in love.

From the days of Abraham until today, the condition for all peace agreements, with any country, depends on our agreement to make peace between ourselves. If we continue to separate and quarrel amongst ourselves, then those countries that have already signed agreements and captured beautifully as a poster picture may withdraw their signature from the accords.

It is very unfortunate to live in such a time when we had supporters such as former President Trump and were given the opportunity to manage our destiny in a direction that is beneficial to us and all people, but we have disregarded and rejected that opportunity. Who knows when such a chance will return.

It seems to us that we live on the land of Israel by our resilience, intellect and the force of our hands, but the truth is that we exist here by the grace of heaven. Agreements are always preferable to fractious relationships, but first and foremost we must commit and agree among ourselves that despite the separating egoism, we will strive to increase the power of connection between us and be kind to each other. Only in this way the supreme grace will be aroused, and He will make peace among us and with the rest of the world.

“What Are The Biggest Challenges Facing Humanity These Days? Why Are They A Big Deal?” (Quora)