“Why Is Antisemitism Prevalent Among The Progressive Left, Particularly The Feminist Left?” (Quora)

Michael Laitman, On Quora: “Why is antisemitism prevalent among the progressive left, particularly the feminist left?“

Antisemitism is a natural phenomenon, which emerged together with the emergence of the Jewish people in ancient Babylon around 4,000 years ago. It is rising in both the political left and right, as they both stem from the very causes of the phenomenon of antisemitism itself. Hatred toward the Jewish people unfolds in several additional ways to how it appears from a particular political standpoint.

However, the burning question right now is, what do we do about it? 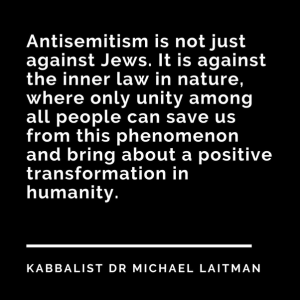 Antisemitism is not just against Jews. It is against the inner law in nature, where only unity among all people can save us from this phenomenon and bring about a positive transformation in humanity. Antisemitism is thus by no means a narrow inclination toward Jews. It is much broader in scope.

The human ego—the desire to enjoy on account of others—has started consuming itself, and it needs correction. The more this ego makes people feel hatred toward each other, and the more this hatred pains them, then the more people instinctively connect that hatred to the Jews. In addition, hatred toward Jews temporarily helps them, because without it, their growing hatred would erupt more among themselves.

Therefore, I think that we should view antisemitism as a natural phenomenon that exists before and beyond political sides, and we need to respond to it accordingly. Antisemitism cannot end with any small fixes within or between political sides, or if we leave the State of Israel, as several of our critics—especially in the Arab world—demand.

Antisemitism is a phenomenon that exists at the level of nature’s forces, which permeate humanity and all of nature. Jews, the people of Israel, the nation founded on uniting (“love your neighbor as yourself”) above division (“love will cover all transgressions”) in order to spread that unity to humanity (to be “a light unto the nations”) need to correct the human ego—to unite positively above it. They have a method that can save humanity from the ego’s overgrowth in our era.

Therefore, I make no special connection of antisemitism to the left, the feminist left, or to anywhere else on the political spectrum. Antisemitism goes much deeper than politics. However, natural evolution through the inanimate, vegetative and animate levels of nature has turned humanity into a self-consuming being. And it is not that the Jews are the worst people in the world. It is simply that they have a method for how to unite humanity, and by doing so, save humanity from today’s excessive and dangerously destructive human ego.

We should thus not think about how to make small fixes here and there. Instead, we need to achieve unity. I am certain that if the few million Jews on the planet today would think about how to unite in order to do good to all humanity, then that unifying tendency would expand throughout the world, and everyone would join in.

As a practical measure, if I had it in my power to do so, I would not turn to Jews, but to all haters of Jews and Israel. I would explain to them how exactly the Jews block their happiness, and would also request that they redirect their pressure on the Jews: to demand Jewish unity. This is because, if Jews unite, antisemitism will disappear, and the whole of humanity will unite. And when united, all the burning problems we perceive in our lives today would simply disappear.

In short, humanity is headed toward a state of perfect unity. Humanity can unite on condition that the people of Israel unite. Today, however, the Jews are more divided than any other people. Therefore, antisemitism will gradually acquire forms that will force Jews to unite. Eventually, an inner perception will form within us Jews, that we need to unite, and by doing so, we will save ourselves and the whole of humanity from all hatred, division and crises.

Based on a talk “Meetings with Kabbalah” between Kabbalist Dr. Michael Laitman, Prof. Eli Avraham, Gabriel Malka and Dr. Eli Vinokur on May 28, 2021.

“Why Do So Many People Have Depression Nowadays?” (Quora)

Year 2021—The End Of The Era Of Slavery
Podcast Powered by podPress (v8.8)