“A New Level Of Pressure” (Linkedin)

My new article on Linkedin “A New Level of Pressure” 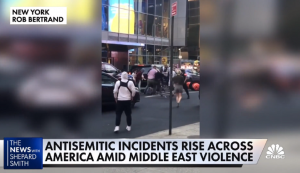 Operation Guardian of the Walls may seem like yet another round in a seemingly endless campaign between the Israelis and the Palestinians, but it isn’t. By all indications, it marks the onset of a new level of pressure on Israel and Jews the world over, one that will impel us all to reflect more intently on the reason for our being here in Israel, and the existence of our nation altogether.

Antisemitism is no longer exclusive to Republicans or Democrats, to Europe, or to the US. It is omnipresent, and Jews the world over are beginning to feel that there is no escape from it. This is the positive thing about it: It is clearly a pervasive, natural phenomenon that we cannot dodge. From day to day, humanity is being divided in a way we’ve never seen before: Jews on one side, and everyone else on the other. Those on the Jewish side are feeling mounting pressure from the world’s intensifying hatred, while everyone else is being prompted to hate the Jews.

In a sense, it is reminiscent of Abraham’s situation when he started talking about the need to unite and rise above the ego in his homeland of Babylon and found himself at odds with almost everyone, including the king, and even his own father, Terah, who supported pushing his “unruly” son into the furnace.

It is not an indiscriminate pressure. The nations are pressing Israel and Jews to change their behavior. The demand itself is correct, but without understanding the nature of the change, the Jews experience it as arbitrary hatred rather than as a demand for a specific correction. If this continues, it will explode with an attempt on the part of the world to inflict on the Jews a final annihilation. In fact, the only reason that this has not yet happened is that our vocation requires our presence in order to carry it out. But if we shun it for not much longer, nothing will help us, just as from a certain point, nothing helped European Jewry in the 1940s.

As the world grows increasingly belligerent, people feel that the origin of the aggression is the Jews. Even if the Jews don’t feel it, this is what the nations feel, and they say it very openly. Denying it won’t help since this is what they feel, and reason never defeats emotion. They will buy into any pretext, and there will be no way to convince them otherwise, since they will be right: We are the cause of their misfortunes.

The ancient onus on the people of Israel to bring unity to the world, to set an example of implementing “Love your neighbor as yourself,” has never been revoked since it was given. As then, so now, the people of Israel are the focal point of humanity. We were, and we are the purveyors of the faiths, ideologies, and ideas that drive the evolution of humanity, and we cannot opt out. But the only thing that the world needs now is unity, solidarity. It’s got plenty of everything else, but zero care and mutual responsibility. Our nation, which was established on the basis of mutual responsibility and love of others, and from which entire nations drew their social ideals and morals, must revive its commitment to its task, establish internal unity, and become the example that everyone expects it to become.

We must understand that our conflict with the Arabs is not really with the Arabs; it is with all of humanity. This is why the whole world sides with Hamas, a designated, officially proclaimed terrorist organization. The fact that humanity is on the side of the terrorists indicates that the one thing that is worse in the world’s eyes than terrorists, the one thing that does more harm than a genocidal organization that uses children as human shields, is the Jewish people.

Even if they cannot articulate it, their demand from us is unity. If we unite, they will lift us on their shoulders as in the prophecy of Isaiah (49:22), since they, too, will be able to rise above their conflicts and establish world peace. If we do not unite, the world will unite against us.

For more on this topic, refer to the books The Jewish Choice: Unity or Anti-Semitism, Historical facts on anti-Semitism as a reflection of Jewish social discord, and Like a Bundle of Reeds: Why unity and mutual guarantee are today’s call of the hour
[283350]

The Entire World Is Behind Us
Podcast Powered by podPress (v8.8)