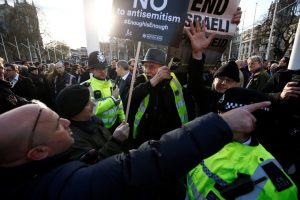 Academia has become a bastion of antisemitism across the globe, and both the UK and the US are not exceptions. The most recent case of inflammatory statements against Jews and Israel emerged from David Miller, a professor of political sociology at the University of Bristol who advocates to “end Zionism,” and who accused Jewish students of being used as “political pawns by a violent, racist foreign regime engaged in ethnic cleansing.” The hatred against Jews will not be ended by saying he is not right. As Jews we can only stop the problem of antisemitism through a two-pronged approach: explain the root of it, and fulfill our expected role by establishing unity among us.

As it is written in The Book of Zohar, “Everything stands on love” (VaEtchanan). It is the obligation of the Jewish people to unite in order to show the way for the cohesion and balance of the entire human race by implementing the great tenet of the Torah, “Love your neighbor as yourself.” When this happens, animosity towards Jews and Israel will transform into praise and appreciation.

Miller’s words left no one indifferent. A good number of scholars signed a letter backing Miller’s right to academic freedom, while hundreds of professors from around the world, in contrast, penned another letter criticizing his hateful idiocy. Bristol University in the meantime has not removed him from his position and merely expressed that they do not endorse his statements.

As uncomfortable as it might be, antisemitism is a natural manifestation in people. We can punish haters on college campuses or in any other educational institutions and it will never end the problem. In the place of this antisemitic professor there will be another hundred, and another two hundred, and thousands upon thousands that will continue multiplying worldwide. We already see this undeniable phenomenon in America where forces against Jewish students are not only growing but strengthening over time. The high value Jewish tradition has placed on education attracts many young Jews to college and university campuses, and their prominent participation puts them at the cross-hairs of anti-Jewish and anti-Zionist sentiments.

We need to understand that what lies behind antisemitism is rooted in history, all the way back to ancient Babylon where the Jewish people emerged some 4,000 years ago. The people of Babylon thrived at first and worked in unity toward common goals, but later, as their intensifying egos alienated them from one another, they fell into unfounded hatred.

The solution proposed by Nimrod, king of Babylon, was the dispersion of the people. He argued that when people are far from one another, they do not quarrel. Abraham, at the time a renowned Babylonian sage, suggested a second solution. He had observed the integrality of nature and pointed out that it is nature’s dictate that human society must eventually become united. Therefore, he campaigned to unite the Babylonians despite and atop their growing egos.

Today humanity finds itself in a state very similar to the one the ancient Babylon experienced. We are globally interdependent, yet, at the same time, we are alienated from one another. But because we have already spread throughout the world, Nimrod’s solution of parting ways is no longer practical. We are now required to use Abraham’s method.

Because we as Jewish people have previously implemented Abraham’s method and achieved a state of optimal connection, we must rekindle our unity and teach the method of connection to the whole of humanity. If we fail to do so, the pressure against the Jewish people will continue to escalate.

Antisemitism can only be solved through two thrusts: 1) advocacy against antisemitism on the one hand, and 2) the proper functioning of the role of Israel to exemplify and educate for unity, on the other. This must take place both in theory and in practice. In other words, we need to explain that when the Jewish nation fell from its moral apex of love of others, hatred of Israel among the nations began. Through antisemitism, the nations prod us to disclose the method of connection. Therefore, the people of Israel, descendants of the ancient Babylonians who followed Abraham, are required to set an example for the whole of humanity and thus become a light unto nations.

As it is written in The Book of Zohar, “Everything stands on love” (VaEtchanan). It is the obligation of the Jewish people to unite in order to show the way for the cohesion and balance of the entire human race by implementing the great tenet of the Torah, “Love your neighbor as yourself.” When this happens, animosity towards Jews and Israel will transform into praise and appreciation.
[279237]

The Creator Is Playing Hide-And-Seek With Us