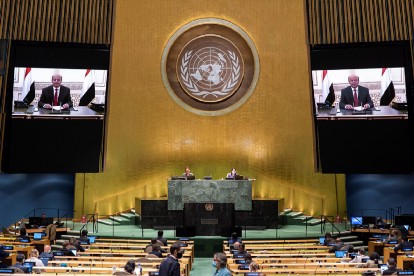 It’s a new world. A global pandemic has highlighted the weaknesses of all the systems created by humanity. Enormous health and economic challenges, deep social problems, and polarized societies are the order of the day internationally. Is it possible that an aging United Nations holds the solutions to these ills? As the organization celebrates its 75th anniversary, it is clear that what it has failed to accomplish until now cannot be expected to suddenly materialize. Humanity needs to realize that solutions for the current crises will not come from any geopolitical body but only from the individual correction of our human relationships from egoistic to altruistic.

The call to action for the UN should be bringing people together through a comprehensive education program for social connection as a condition for societies where everyone is closer to each other. At the end of the day, it is the unity of the peoples that make the nations truly united.

“In an interconnected world, it is high time to recognize a simple truth: solidarity is self-interest. If we fail to grasp that fact, everyone loses,” said UN Secretary-General António Guterres during the General Assembly celebrating virtually for the first time in history, as COVID-19 shows who really runs the show going on in the world and who establishes its conditions.

And if the impact of the most engulfing pandemic we have ever experienced were not distressful enough to so many people, we have other crises waiting in the wings of our overwhelming international scenario — growing geopolitical tensions, rampant poverty, hunger, poor and outdated education systems, hatred, bigotry and antisemitism.

It is revealed in our daily lives in an unprecedented fashion how globally interdependent we are. A basic tenet of interdependence is that if any piece fails, the entire mechanism comes to a halt or barely limps along. Thus, we have come to realize how our smooth connection is indispensable in order to enable individuals and nations to thrive. On the contrary, if we fail to reach a profound shift to positive mutual relationships between all of us, then we can expect to experience increasing pressures and crises in a steady downfall as it has been the case throughout the years.

After 75 years of the existence of the UN, not many achievements can be attributed to the organization. From the eyes of an ordinary citizen in a remote country, one may ask, “What has this organization done for me?” Instead of global cooperation in the face of threatening challenges, we instead witness a club of government representatives throwing accusations at each other, emissaries of senior world leaders taking pot shots at the opposition and flamboyant expenses.

I have previously met with senior representatives of the UN and UNESCO so I understand they operate according to a predetermined policy. Therefore, I know better than to expect UN politics to suddenly behave differently tomorrow morning. In our current situation they have no chance of success. They get clear ideological lines from their respective heads of state and behave according to script without deviating right or left. It is clear that they are distinctly politicians and nothing more.

Nevertheless, a call for the abolition of the UN is not an alternative. It is still an important diplomatic space to meet and talk instead of engaging in wars and struggles. For the UN to function beneficially for humanity, however, would require turning it from end to end to set a higher goal, streamline the organization, and improve and upgrade it. The face of the UN is the face of the international community which depicts the face and state of every country and person in the world. And since every person is selfish by nature, his tendency is to care for himself only. In other words, we cannot expect anything more than the same from an organization that resembles and reflects the state of the world.

The next step that humanity longs for from a global organization is to act as an arena and platform for unity instead of division. Instead of glossing over and blurring the crises facing humanity with beautiful sounding words, it is my hope that the UN will join hands with other international organizations to put the interests and good of all the world’s citizens at the center of attention. The call to action for the UN should be bringing people together through a comprehensive education program for social connection as a condition for societies where everyone is closer to each other. At the end of the day, it is the unity of the peoples that make the nations truly united.
[271416]

“How We “Earned” Being Covid’s Prime Target” (Linkedin)