“Survival Of The Fittest Is A Lie We Tell Ourselves” (Medium) 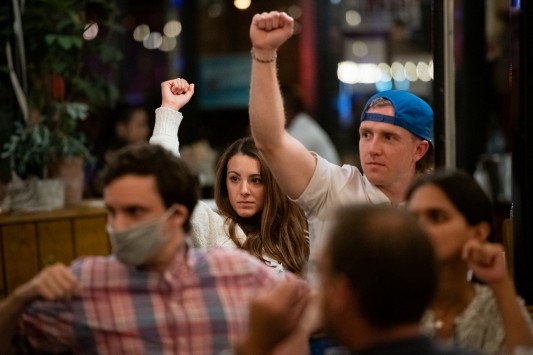 With each passing day, we have to realize that despite the growing tensions, we hate the wrong enemy. We think the enemy is that man who supports the other party, or that woman who belongs to the other race, or that person who is more privileged in some way, who is richer, smarter, prettier, luckier, or any other “er” that I would like to be or have.

There will be no winners in this war because it isn’t the right war. The right war is against our own egos, and we can defeat them only if we fight it specifically alongside those who are unlike us, whom we dislike, and of whom we disapprove, since this is the only alliance that our egos will never support.

But none of them are my real enemies. There have always been people who were more successful than we in some way, and there always will be such people. But they didn’t use to make us feel bad, and they didn’t use to make us feel that we want them out of our lives, and if possible, out of existence. They have always been here, but we were different. We were less self-entitled, less absorbed with ourselves, or simply, less selfish. Yes, our own egoism is our enemy.

We can’t control it; it’s growing from within us and is so much a part of who we are that we don’t even feel that it is the problem. But if we don’t learn how to work with our ego, it’ll lead us into civil war because we won’t be able to tolerate anyone’s existence but our own and those who think like us and look like us.

There will be no winners in this war because it isn’t the right war. The right war is against our own egos, and we can defeat them only if we fight it specifically alongside those who are unlike us, whom we dislike, and of whom we disapprove, since this is the only alliance that our egos will never support.

But it has to be a common decision, taken by the whole society on all its factions, or it is bound to fail. And should you ask what will motivate people to cooperate with those they hate, or even relate to them positively? The answer is that we have run out of options. If we don’t do it, we will all fall. We’ve come to a state where we are totally dependent on each other, and we are dependent the most on those we most dislike.

Actually, not only we, but all of reality consists of opposites that complement one another. They do not like each other, but are completely dependent on each other and their own existence guarantees and sustains the existence of their opposite or “rival.”

Think of “night” without “day,” “winter” without “summer,” “dry” without “wet.” Or when it comes to people, think of Black without White, Republican without Democrat, Liberal without Conservative. Can you imagine a coin that has only one side? This is how dependent we are on one another.

We think that when Darwin discovered the principle of “Survival of the Fittest,” he meant that only the meanest and most belligerent survive. This is a complete misinterpretation of his words that our pugnacious egos impose on us. A recent book by Brian Hare and Vanessa Woods titled Survival of the Friendliest writes that “to Darwin and modern biologists, “survival of the fittest” refers to something very specific — the ability to survive and leave behind viable offspring. It is not meant to go beyond that.” Moreover, they add that “Darwin was constantly impressed with the kindness and cooperation he observed in nature,” and quote his book Descent of Man, which states, “Those communities, which included the greatest number of the most sympathetic members, would flourish best and rear the greatest number of offspring.”

We are headed in the opposite direction. We are breaking our social fabric, tearing apart our communities, and dismantling the country. In such circumstances, we ourselves will not survive. And the only culprit is the human ego. We are now at a point where either we unite against it and help each other overcome it by encouraging each other to connect, and by trying to unite with those unlike us, or the ego will win and we will all lose everything.
[270871]

“If Peace With The UAE And Bahrain Is Good, Where Are The Trumpet Sounds?” (Medium)